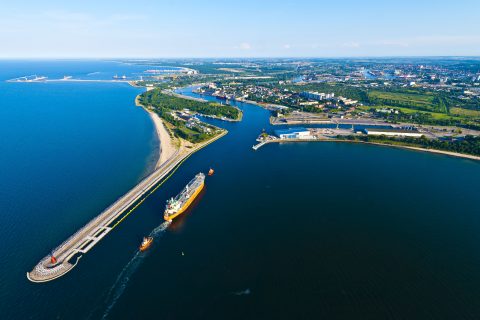 The Port of Gdansk witnessed record volumes of cargo handled in the first half of 2019. Compared to the same period last year, it saw an increase of 9 per cent. For the first time, the Polish port handled more than 25 million tonnes of commodities within 6 months.

“27.3 million tonnes of goods – this is how much cargo passed through our quays since the beginning of the year. This is 4 per cent more than we had planned for this period”, said Lukasz Greinke, President of the Port of Gdansk Authority. In total, the port handled 50 million tonnes of all types of cargo in 2018. The port wants to double these volumes to a billion tonnes in 2030, Marcin Osowski, Vice President Infrastructure said earlier.

“We managed to achieve increases in virtually all cargo groups. Fuels are the leader after the first half of the year, having reached impressive growth dynamics of 21.5 per cent compared to the previous year,” explained Greinke. “Coal is the third largest cargo group, having come to nearly 3.5 million tonnes this first half of 2019.”

The Port of Gdansk also achieved a great result in the transshipment of general cargo – as many as 11.3 million tonnes were handled, 4.2 per cent more than last year. Over 10.3 million tonnes out of the above were goods transported in containers.

Also interesting is the modal split of the Port of Gdansk; around 33 per cent of containers are handled by rail. Taking into account the anticipated infrastructure investments of Poland, this could be raised to a modal split of 50 per cent, said Osowksi. To put these numbers in perspective, the north-sea ports of Bremerhaven and Hamburg saw a modal split of 46 and 43 per cent respectively in 2017.

“The dynamics of transshipment growth at Polish seaports clearly show that we need to invest in the development of infrastructure. This is why we are preparing a special act on outer ports, which will accelerate the execution of investments, which will in turn translate into an even higher increase in transshipments,”says Marek Grobarczyk, Minister of Maritime Economy and Inland Navigation.

The development plans of the Port of Gdansk assume that the transshipment dynamics will increase even further in the coming years, not only thanks to the redevelopment of the existing areas, but also thanks to the planned construction of the Central Port. The investment will make it possible for the Polish port to handle up to 100 million tonnes a year.

If Gdynia Port some day will connect with Gdansk Port Polnocny (only 25km distance between these two Polish ports), then they together could be the biggest port in Baltic Sea.