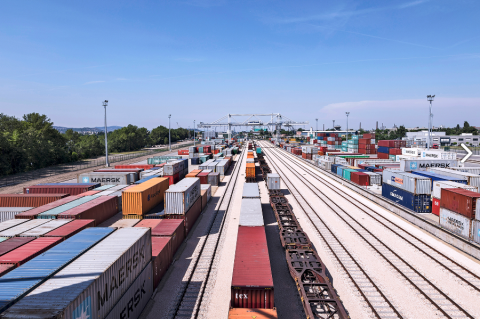 While some European hubs are growing in terms of freight traffic volumes, this leads to the marginalisation of some smaller, inland terminals. Truckers rather opt for the larger terminals with a high frequency of train connections. The logistics product of the smaller terminal is just not attractive enough, explained Onno de Jong, Consultant Transport & Infrastructure at Ecorys, a research and consultancy firm.

Ecorys is the owner of Intermodal Links, an intermodal route planner for container transport within Europe and increasingly also to and from other continents. Apart from offering route planning as a service, the company also derives data from the product, forming interesting insight in the flow of intermodal traffic in Europe and beyond. It will present these insights in a workshop at the Freight and Terminal Forum, taking place from 26-28 March in Utrecht.

“We are seeing strong growth at a number of hubs. These hinterland hubs have succeeded in increasing train frequencies to and from the seaports and subsequently, attracting more and more connections, also on a continental level.

“At the same time we see some small terminals marginalising. They have fewer connections, and if you can only offer this connection two or at most three times a week, the logistics product is not attractive enough. When there is a hub nearby that does offer high frequencies, we see that parties choose to drive to these hubs by truck”, noted de Jong.

Ecorys sees certain trends in the intermodal landscape, for example the general shift of traffic volumes to the east. Central and Eastern Europe have become true rail destinations, de Jong said. “An absolute success is the development of the intermodal shuttle network to and from Poland, for example the Poznan region. But we also see a lot of growth around Warsaw.”

Southern Germany (for example the Munich Belt) is and remains an important region for container shuttles, while Vienna and Budapest are gaining importance due to the BILK terminal, which is becoming a real hub, the consultant describes.

“In the more “classic” areas for intermodal container transport, we see the region around Milan still growing. A striking development, by the way, is that of Dourges in France as a rail hub. It really succeeds in developing Dourges into a link between the ports of Rotterdam and Antwerp and French hinterland destinations such as Lyon, Toulouse, Fos-sur-Mer.”

The New Silk Road, although described by many as a booming success, has not yet impacted the landscape of freight traffic, according to de Jong. This is mainly because the new connections between Europe and China are often trail services, which have yet to be turned into regular lines. “We see them, but we are not yet seeing a huge shift in the network structure. Many services in China are linked to existing services to terminals in Duisburg, for example. However, this could work as an enabler of higher frequencies.”

More notable are the developments on the Adriatic coast, with Koper and Trieste as promising sea ports. “Trieste in particular has many (direct) rail connections to and from a number of important intermodal rail countries such as Austria (growing fast), Germany and also to Scandinavia (Sweden)”, the consultant said. Combined sea and rail services are also a common service offered, with destinations such as Turkey, he noted.

Intermodal Links is used by shippers, but also freight forwarders and other logistics service providers. While some companies use the tool to get an overview of the market, it is also used for complete route planning. Moreover, port authorities use it as a marketing or analysing tool for competitive intelligence. Intermodal Links also contribute to research projects from, among others, the European Commission, thereby supporting the multimodal policy of the European Union.

Onno de Jong and Jeroen Bozuwa will provide a workshop about the trends of the intermodal market. Are you interested in this workshop or would you like to join the discussion? Registration is free of charge. You must first register for the Freight & Terminal Forum, Expo only. Then, you visit the workshop programme and select the workshop of your choice.