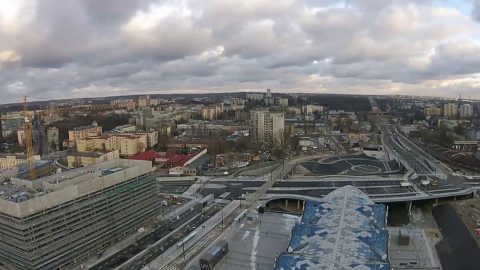 PKP Cargo is planning to establish a rail freight hub in the centre of Poland, in the city of Łódź. It is to form the centre of freight transport in the country, which has seen traffic volumes rise exponentially since the revival of the New Silk Road.

The freight division of the Polish PKP Group currently owns 9 terminals in the country: 7 intermodal terminals and two on the border with Belarus. In addition, it runs 21 bulk cargo terminals. Andrzej Banucha, Deputy Director Development, Investor Relations & Marketing Department of PKP Cargo SA will share his expertise on terminal operation at the conference Improving Rail Terminal Efficiency, to be held on 28 march in Utrecht, the Netherlands.

The Polish rail freight market develops very fast. The rise of Eurasian traffic through Poland
is the main driver, but the economy in general is boosting the sector. In order to grow with these developments, the operator is looking at the construction of a new, large terminal in the middle of the country. This should transform the city in a rail freight hub.

“We have already acquired a piece of land in Łódź. We are now carrying out a business possibility study, but the plans are in an advanced stage. Once complete, it will probably be the biggest terminal in Central and Eastern Europe”, explained Banucha.

It is just one of the measures of the freight operator to make its terminals more efficient. It is also investing in digitalisation, automation and new loading techniques. “For example, we want to make it easier to load a truck on a train. When a truck passes a distance longer than 400 kilometre, it should ideally be on a train.

“We constantly look at the market; how does the traffic spread in the country? Where are the volumes? When we see stable growth, we invest in more facilities. For example, we consider expansion of the intermodal terminal in Poznań. This was first a terminal rarely used, and now it is full.”

PKP Cargo is best known for its operation of the terminal at Malaszewicze, where it handles traffic to and from China. This is the most frequently used terminal on the border with Belarus, and is often the topic of discussion due to congestion. According to Banucha, PKP Cargo is currently able to handle the traffic flow, as long as this flow is regular. If there is an imbalance of volumes, the terminal gets congested.

“This is what we see after the Chinese New Year; during the holidays rail freight traffic from China was at a standstill, and now it all resumes at once. We can handle 14 trains a day, but when we receive 20 trains all at once we have a problem. Currently, we see a different number of trains every day.”

When discussing this terminal, Banucha wants to point out that congestion at the border is not always within the scope of the terminal operation, as the customs formalities are carried out further on. “As this is the first entry point into the EU, every train at the border is scanned by the European Commission. However, there is only one singe scanner for this procedure. The Polish ministry has the aim to increase the number of trains crossing the border to 55 per day. “This is an ambitious goal: we need more scanners, more railway and a new bridge crossing the river”, said Banucha.

Apart from such measures, the border crossing at Czeremcha – Wyskolitowsk will be reopened by the end of 2019. This will be an intermodal bypass north of Malaszewicze. ”The terminal at Sławków is also operative, but is currently only used for traffic between Poland and Ukraine, he explained. “Due to political tensions between Russia and Ukraine, rail freight traffic to and from China via Sławków does not exist at the moment.”

PKP is now preparing to gather all its terminals under one entity. Currently, there are four entities running the terminals in one PKP CARGO Group; here are some gains to be made, Banucha pointed out. “We are consolidating our business. If all terminals from our Group operate as one company, we are able to offer a much wider offer to our customers, such as improved connections between the terminals.”

Banucha will take part in a panel session about the geographic location of terminals at the conference Improving Rail Terminal Efficiency. He will discuss the ideal sea port/inland terminal ratio and how terminals should be distributed over a given territory. Other panel members are Alexander Mironov of RZD Logistics, Peter Pardoel of Cabooter Group and Rob Spierings, railway consultant.