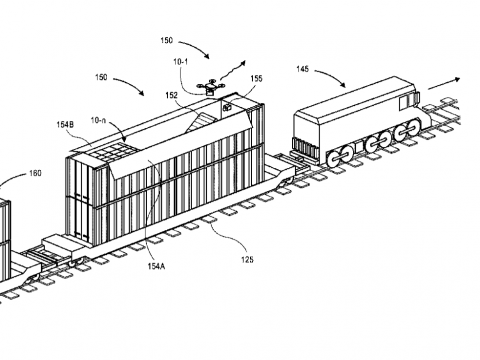 Amazon has come up with an idea that will allow the use of drones for the last mile of intermodal transportation of purchased goods. It is looking into ground-based mobile maintenance facilities that can store, repair, and deploy drones. Freight trains are one of the vehicles projected to function as such facility.

Amazon filed a patent for what it calls the ‘intermodal vehicle’ earlier this year. This patent was published by the United States Patent and Trademark Office on the 1st of August. Although Amazon has not announced any serious undertaking to realise the concept, the company describes in detail what the innovation could look like.

Thus, a freight train could be stored with the items to be delivered, as well as the drones that are to carry to shipment forward to its final destination. The grand innovation is the drone facility, where the aerial vehicles can be prepared to reach their full potential. This facility would be come in the form of an intermodal vehicle, at least equipped with a plurality of batteries, one robotic arm and a system for launching or retrieving the aerial vehicle.

The use of intermodal vehicles allows the company to preemptively move products and drones to areas of anticipated demand, while using the travel time to carry out the necessary preparations. A computer on board allows the vehicle to communicate with the drone. It determines which preparations must be carried out, where it should be headed or where it should recapture the flying object. If needed, the direction of the train can be adapted to the location of the drone, or to the location of a warehouse to pick up a specific delivery item.