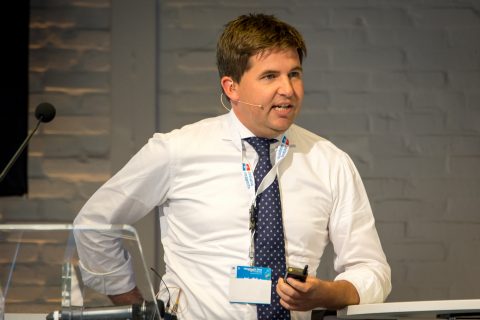 Thomas Steffens van Boston Consulting GroupIn the coming years, the rail freight sector must significantly reduce costs and increase quality. If railway freight companies do not innovate quickly, then in the long-term they will lose 20 to 30 per cent of their market share to road transport. Currently this latter sector is making extensive steps in the field of self-driving technology. In 2030, trucks will be able to drive fully autonomously and so compete with rail transport. So remarked Thomas Steffens from the Boston Consulting Group (BCG) at the UIC Global Rail Freight Conference in Rotterdam, during his presentation entitled ‘Will the driverless truck derail the freight train?’

“Self-driving technology will damage the railway sector, unless the latter can significantly reduce its costs and considerably improve its quality in time,” according to Steffens. “That can done by, among other things, condition-based maintenance, better connection between operation and maintenance, more intelligent buying, planning for spare parts, and linking salaries to productivity growth.”

Self-driving trucks will be introduced in 2020 and before 2030 there be fully driverless trucks on a large scale, predicts the BCG. “Although completely self-driving trucks seem a long way off, the industry is now ready to invest in them. This technology will reduce the costs of road transport by up to fifty per cent and increase quality.”

The railway sector must therefore do something now to ensure that it becomes quicker and more competitive, stated Steffens. Furthermore, the sector must look carefully at planned investment. “With every large investment, such as the implementation of the ERTMS or building new infrastructure or tracks, tests must be carried out, including with various scenarios involving self-driving transport, to see whether the objective of the investment can actually be achieved.”

“There is a risk that investment will be done on the basis of the current world view, but not suited to the reality in 2030 or 2040. You cannot precisely predict demand, but you can conduct stress tests on the basis of various demand scenarios, such as a scenario with a large-scale roll-out of self-driving cars.”
Investment

The European Railway Traffic Management System (ERTMS) means driverless trains are already possible to a certain degree. For instance, the system kicks in if a train goes, or threatens to go, through a red signal at high speed, and stops the train automatically. In the long-term the system can also be used for driverless trains. “The railway sector has to exploit every opportunity to reduce costs as quickly as possible so as not to fall behind in terms of competitiveness. The self-driving train is certainly one of these opportunities,” according to Steffens.

At the moment, ProRail and DB Cargo are looking into the possibility of employing this technology on the Betuweroute. In June, the two companies announced some tests of driverless trains on this freight line. How this can be done safely will be looked into. In Australia, iron-ore producer Rio Tinto is currently working on its first fully automatic freight line. The company expects that the introduction of unmanned operations will improve the safety and capacity on the tracks.    Truck platooning

In the automotive sector, self-driving technology has increased dramatically in recent years. “That is because there are few legal barriers, the costs are comparatively low, and the technological obstacles are limited,” according to Steffens.

Development in the Netherlands is also happening quickly. The European Truck Platooning Challenge took place there in April. Truck platooning means that two or three trucks connected via Wi-Fi drive in convoy. The first truck determines the speed and the route, and the other trucks can follow closely, with the driver acting only as a supervisor.

In Steffens’ opinion, “platooning reduces the costs of freight transport by road by ten to twenty per cent. If trucks become fully driverless, these costs could drop by fifty per cent. Then road transport will be quicker than rail transport in door-to-door transportation.”

In order to compete with road transport, the railway sector needs to improve its competitiveness, to develop business cases for investment, and to build up its position in driverless transport. “Tests put pressure on governments to invest, but continue to develop at the same time. The competition is going to work hard on this technology, so you need to make sure that you keep up.” According to Steffens, the railway sector needs to take a leading position in self-driving technology, which is not happening at the moment.