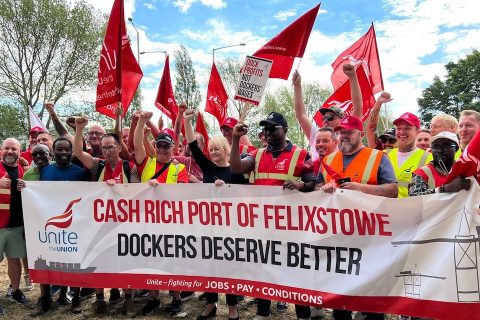 Rail workers all over the world have organised and are organising multiple strikes to grab the industry’s attention on the issues they deem more important. The rail sector, and therefore rail freight, is in fact currently facing similar issues everywhere on Earth. Negotiations for better collective agreements are taking place in various countries, with different impacts.

Since the end of July, strikes have happened in the United Kingdom, Spain, Austria, and South Africa. The threat of a massive strike is upon the rail freight industry in the United States, and one of Australia’s largest rail freight companies forced a lockout on over 800 workers.

When it comes to the United Kingdom, things have been more chaotic, with different unions calling for strikes on different days. Unions have largely rejected the proposal of a 5 per cent wage increase brought forward by Network Rail, the UK’s infrastructure manager. Moreover, workers are asking for better general conditions of employment (seven day working) and long term security of employment.

The most active unions so far have been the Rail and Maritime Transport union (RMT), the Associated Society of Locomotive Engineers and Firemen (ASLEF), the Transport Salaried Staffs Association (TSSA), and Unite. The most impactful events, in this case, were two 8-day-long strikes called by Unite at the port of Felixstowe, the UK’s busiest container port.

RMT called its first strike on 28 July and over 40,000 of its members joined. According to observations at the time, eighty per cent of services on the British mainland failed to operate on that day. Another round of strikes was launched on 15 and 17 September, which mostly affected passenger trains traffic. Moreover, RMT announced a general walkout on 1 and 8 October and more strikes on Network Rail on 3, 5, and 7 November. Estimates at the time claimed that over 30 per cent of freight trains would be canceled, equaling around 100 daily cancellations.

Unite, one of the UK’s largest unions, has also called its members employed in electrical control rooms for strikes on 1, 5, and 8 October. Since the end of July, ASLEF has called its members to strike on three days. The first one occurred on 30 July, while the second one was announced for 1 and 5 October.

The Transport and Allied Staffs Association (TSSA) was also quite active in spurring its members to strike. The first TSSA strikes took place on 18 and 20 August and a general walkout was organised between 26 and 27 Setember. However, the walkout was canceled due to queen Elizabeth passing away. Instead, the union asked its members at Network Rail and eleven train operating companies to take industrial action and go on strike on 1, 5, 6, and 8 October.

The most significant activity in terms of strikes took place at the port of Felixstowe, in southeastern England. Here, the Unite union called for two rounds of strikes that lasted eight days each that were joined by more than 1,900 union members. The two strikes occurred between 21 and 29 August and between 27 September to 5 October.

As in the most cases, the dispute is over a pay deal. Unite claimed that the proposal from the port owners, Hutchison, neither reflects their success nor does it recognise the increasing cost of living. Hutchinson’s offer was between an 8 and 10 per cent pay increase, depending on the workers’ current salaries.

Unite’s general secretary Sharon Graham justified these strikes by claiming that employers at the port of Felixstowe “have been prioritising profits and dividends instead of giving their workers a decent share of the pie”. The union is in fact claiming that Felixstowe Docs and Railway Company could have made a more generous offer but decided to give payouts to its shareholder for over 120 million euros.

It is worth noting that the RMT strikes got significantly more media coverage compared to the strikes at Felixstowe. However, the latter have been economically damaging too, and their effects have been more keenly felt in the logistics supply chain.

The unions agreed on having workers go on strike on three different days: 28 October, 7 and 11 November. The first strike was called off by all unions on the grounds of Renfe’s commitment to intensify negotiations. The strike scheduled for 7 November was called off by all unions except CGT, which accused the other unions of betraying the railway collective. The strike planned for 11 November did take place with over 14,000 workers joining in. The strike caused over 200 freight trains to be canceled, amounting to 75 per cent of freight traffic for that day.

Renfe vs the unions

The dispute between Renfe and the unions revolves around wage increases for rail workers. The company is willing to offer a 2 per cent salary increase. On the other hand, the unions are demanding for more, considering that infraction rate in Spain for October was around 7,3 per cent. They are in fact asking for a 3,5 per cent raise retrodated to 1 January 2022, an additional increases in 2023 (3,5 per cent) and 2024 (2,5 per cent).

Moreover, the unions want to regularise the application of a 35-hour work week and eliminate income categories, which represent a double salary scale. Finally, they are asking for temporary contracts to be turned into permanent ones in 2023. On this front, CCOO pointed out that Renfe “has expressed its willingness to request the maximum replacement rate allowed by the General State Budget Law for all groups”.

A general rail strike was called by trade union Vida in Austria for 28 November after negotiations between the union, OBB, and the Chamber of Commerce for new deal failed. The union called it a warning strike, in light of the fact that this was already the fifth round of negotiations that had failed.

Vida is asking for a 400 euros monthly pay rise for the over 50,000 rail workers, which would equal to a 12 per cent raise. The current counteroffer stands at 208 euros wage increase, a little over 8 per cent compared to current salaries, plus a one-off payment of 1,000 euros.

In the United States, negotiations for a new collective agreement have been ongoing since 15 September. Four out of twelve unions have rejected the deal proposed by the White House, claiming they would go on strike in early December if progress is not made.

BRS stated that they are ready to announce a general strike as early as 5 December, while the other three scheduled a deadline for 9 December. According to first estimates by the Association of American Railroads, a strike of these proportions could result in a loss of up to 2 billion euros per day.

The deal brokered by the White House includes a 24 per cent wage increase over the period 2020-2024. However, workers are asking for better conditions aas well, such as paid sick leave. Throughout the COVID-19 pandemic, for example, workers who were forced to quarantine did not get paid during their compulsory leave.

The United National Transport Union (UNTU) and the South African Transport and Allied Workers (SATAWU) are the unions at the strike’s forefront in South Africa. As mentioned, the strike resulted after a wage dispute with Transnet, South Africa’s port terminal and rail operator. Specifically, the dispute began after the two unions rejected Transnet’s offer for a 3 per cent wage increase, saying that it does not correspond to the country’s inflation rate, which is up to 7,6 per cent.

UNTU started the strike on 6 October, while SATAWU joined on 10 October. Workers associated with the two companies are the backbone of port terminals and rail freight operations. These strikes have in fact caused disruptions in the coal sector, for which Transnet has a monopoly. Estimates from Thungela, one of the leading producers and exporters of thermal coal, pointed out that the strikes could have led to the export of 300,000 less tonnes of coal.

In Australia the situation is slightly different. Pacific National (PN), one of the largest rail freight companies in Australia, has been keeping over 800 employees in the Hunter Valley, north of Sydney, on lockout since 23 November. The lockout was announced after PN employees refused to drive trains that were deemed unsafe in order to prevent further industrial action from the workers.

The current offer presented by PN entails a 4 per cent per annum raise over the next four years. However, the proposal was not warmly welcomed by the workers, considering that the inflation rate in Australia is currently at 7,3 per cent. PN’s plan is to grant a 2 per cent raise when the workers sign the agreement and the remaining 2 per cent when the agreement would be certified.

On the other hand, the RTBU is asking for a 2 per cent pay increase on the expiry of the previous agreement, which occurred in May, and a bonus una tantum of around 4,000 euros. This bonus should reward workers for their efforts and sacrifices throughout the COVID-19 pandemic, and it has been named Pandemic Gratitude Payment.