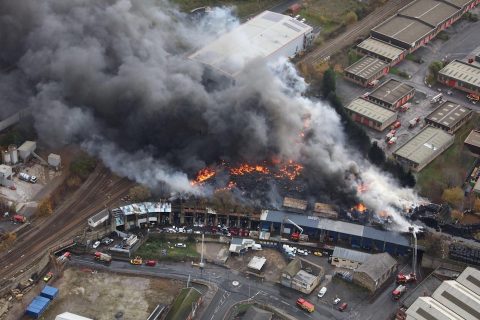 A huge line-side fire has disrupted rail services in and around the north of England city of Bradford for a full week. However, Network Rail has confirmed that a full train service is expected to run at Bradford Interchange from Monday, 23 November, following five days of changes due to the large fire near the railway.

The fire started in industrial units on Bradford’s Upper Castle Street in the early hours of Monday, 16 November. Network Rail said no trains could run to, from or through the station. However, Interchange is a terminus and ‘through’ services are required to reverse. The lines directly affected are rarely used by freight, as the west-to-south base of the triangular junction has long since has its tracks removed, although the heavily overgrown infrastructure still remains in place. Monitoring and maintenance trains, operated by Network Rail and their contractors, do however use the lines to Bradford Interchange from time to time.

Network Rail, the UK infrastructure management agency, said its teams followed guidance from West Yorkshire Fire and Rescue Service regarding safe to access the railway to carry out vital safety inspections and test the signalling. The fire destroyed a tyre processing facility, which caused a huge volume of toxic smoke. Rail operations and civic activities were curtailed for several days.

Passenger trains between Bradford Interchange and neighbouring Leeds resumed on Saturday afternoon, but there was still disruption to services due to the amount of smoke in the area. Trains between Bradford and the city of Halifax, lying to the south, were expected to resume on Monday morning.

Thanks offered to everyone

Matt Rice, route director for Network Rail’s North and East route, said the safety of teams and passengers was a  priority. “With an incident on this scale, it was crucial that we followed guidance from the Fire Service on when the time was right to access the railway. The amount of smoke in the area brought challenges, but our teams have worked tirelessly to make sure lines can safely reopen.”

Rice has been busy with disruption. He was also on hand for the difficult job of repairing infrastructure at Sheffield, where a derailed cement train blocked services. As with Sheffield, Rice was grateful for the cooperation of everyone involved. “We’d like to thank everybody for their patience whilst we’ve worked to clear the area and carry out repairs to enable a full service to resume”, he said. 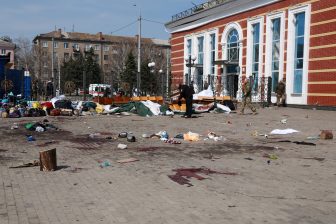 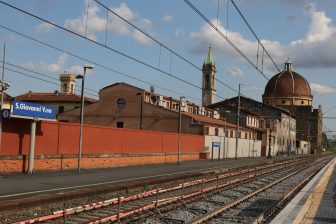