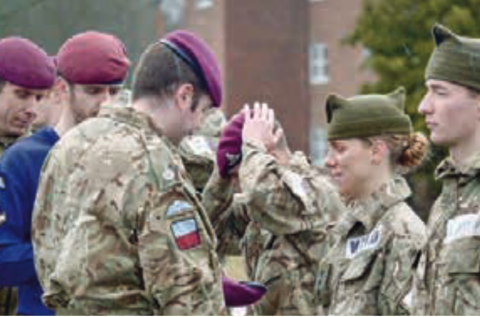 News that Network Rail and the British Army had collaborated at the weekend to deliver medical supplies was worthy of another round of applause from a grateful nation. However, the cooperation of railway and armed services has a long history in the UK, and even this peacetime application is not new.

British Army personnel were rightly praised at the weekend, for mobilising to distribute significant quantities of medical supplies around the UK. Soldiers, who may otherwise have just returned from foreign tours of duty, were working flat out to restock front line health workers in the battle much nearer home, fighting the spread of COVID-19.

Lt Gen Tyrone Urch CBE, standing joint commander in the British Army, echoed the praise of the nation for the troops’ efforts.“It is brilliant to witness how strongly the UK is pulling together regarding COVID-19; the Armed Forces will continue to play any part necessary in support of the Government and this National crisis. Every civilian and military person takes great pride in the contribution we are making.”

Civilian staff at Network Rail have helped too. Many of them volunteered for an arduous delivery trip over the weekend, taking medical supplies from warehouses in the north west of England to military distribution centres. One journey included the length of England – from Liverpool to Aldershot – for onward deployment to hospitals and healthcare facilities.

Even heavier military lifts by rail are not new, however. As recently as last autumn, an entire military unit was transferred from bases in the north of Scotland to the Army training grounds at Salisbury Plain in the south west of England. The resultant railway convoy was the subject of national news coverage in the UK.

Although military trains are a less frequent part of the freight manifest in recent years – primarily due to the reduced size of the British Army’s standing complement, they are not extinct. The Army, under the administration of the Ministry of Defence, has a legacy of railway operations, which often collaborated with the civilian network.

Movements of heavy military machinery are occasionally made from ports in the south of England, as part of overseas operations. Armed services have maintained their own railway facilities in the past, as places like Rosyth Dockyards in Scotland and at Longtown in the north of England.

The now decommissioned base at Longtown has for some time been designated for civilian redevelopment. Part of its extensive rail network may be incorporated into the national network as part of an expanded service around Carlisle and as an extension to the railway to Edinburgh. Local interests seek to see the military network serve local communities and potentially freight from Longtown and timber operations in the Borders of Scotland.

In the immediate coronavirus crisis, the cooperation between civilian and military will continue. Peter Mitchell, logistics co-ordinator at Network Rail, who was involved in the weekend operations, gave every assurance of support to his military colleagues in their work for the National Health Service. “We are doing everything we can to help during the coronavirus pandemic, and the team dropped everything to help the Army and the NHS with this special delivery operation. Network Rail will continue to lend its support wherever and whenever it’s needed over the coming weeks in the fight against the spread of COVID-19”.

While the Army railway operations may not be as extensive as they once were, there is every evidence on the ground that soldiers stand ready to play their part in mobilising the civilian network wherever necessary.