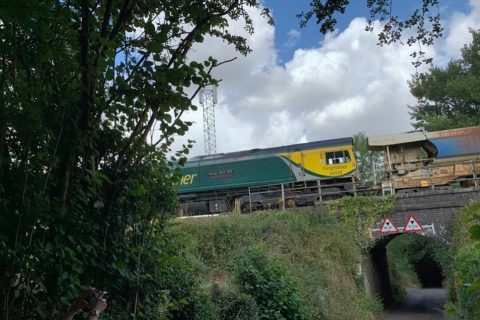 Published on 17-01-2023 at 09:07
Hiding in the bushes, a Freightliner aggregates train near Dronfield on the Midland Main Line (SW)Image by Simon Walton

The British infrastructure agency, Network Rail, is engaged with upgrading the Midland Main Line between London and the cities of Nottingham, Derby, Leicester and Sheffield. The work will enhance capacity on the route and eventually introduce full electrification. The implications for freight could lead to increased traffic on the line and provide relief for both coastal routes.

The busy Midland Main Line is undergoing what Network rail calls the biggest programme of improvements since its completion in 1870. The next phases of MML work will cover the line’s electrification from Kettering to Sheffield and Nottingham. At present, wires only exist as far north as the edge of the commuter belt from London. Putting up wires over the remainder of the line will be a major undertaking, but it will radically enhance the route capacity and versatility.

Britain’s main north-south routes have been undergoing a long and slow electrification programme since the 1960s. The West Coast Main Line was the beneficiary of a wiring programme that took it almost directly from the steam age into the first generation of electric traction. Wires were going up while British railway works were turning out the last mainline steam locomotive. The line has since become fully electrified and is the busiest mixed traffic route in Europe, serving over 400 route miles (640km) between London, Birmingham, Manchester, Liverpool and Glasgow.

Around thirty years later, the corresponding East Coast route was upgraded to electric traction. The imperatives on the route between London, Leeds, Newcastle and Edinburgh were somewhat different, with the line already served by the world-beating HST (High-Speed Train), a radical design of fixed formation diesel trains, still in service today. Although the route benefitted from later generations of electric traction, the curtailed budget for electricity supply installation has proved a constant headache for engineers and operators.

Another thirty years have passed and the hope is that the Midland Main Line programme will benefit from previous experiences. “We are electrifying the line in sections over the next few years to allow electric trains to run along the full length of the line”, said a Network Rail statement. “By electrifying the line, we will be supporting the Government’s net zero carbon targets for 2050.”

Although overshadowed by its coastal counterparts, the Midland has played a vital part in the economic picture. It has always carried a significant volume of heavy bulk goods – primarily coal for the first hundred years, and now vast quantities of aggregates and building materials from sources in the north, particularly the Peak District quarries, to feed the booming sector in London and the southeast of England. All this traffic currently relies on diesel traction. The possibility of bringing this traffic under the wires would significantly contribute to those mandated carbon targets.

So far, Network Rail has upgraded and electrified the first seventy miles (112km) from London, as far as Corby – a former steel manufacturing centre, and now significantly reliant on commuter traffic to London for economic sustenance. The challenge now is to electrify the remaining 100 miles (160km) to reach all the way to Sheffield, which itself was the centre of Britain’s huge steel industry and is still a major industrial centre. It is that industrial activity that the electrified MML will be better able to serve. Political interests hope the electrification project will boost the region economically, particularly Sheffield and South Yorkshire, where there is still furious criticism over the cancellation of the so-called Eastern Leg of the HS2 high-speed rail project.

Network Rail, as the agency caught in the middle of the political storm over Eastern leg cancellation and the constantly shifting shape of rail enhancements in the region, has nevertheless stuck to its guns and pressed on with the delivery of the programme. NR has been at the sharp end of delivering the government’s Integrated Rail Plan – a somewhat discredited programme disrupted by the revolving door at the Department for Transport.

Freight operators continue to use the line intensively. The workhorse class 66 diesel locomotives are almost as frequent as cascaded HST high-speed train diesels, still in daily service after nearly fifty years and having been cascaded from East Coast expresses. The HSTs are, eventually, coming to the end of long and distinguished service, and are due for replacement. They may linger in service for a while, as electric replacements are not available. The class 66 fleet is not quite as venerable and has plenty of life left. It may be that those aggregates trains run under diesel power for some time after the wires go up.

Right now, Network Rail is engaged in a creeping preparation and installation programme, migrating slowly northwards. In North East Derbyshire and South Yorkshire counties, the work has been largely overnight to cut back vegetation. Further south, there are already catenary steels in the ground. “We’ll also be holding events in areas that may be impacted by work to electrify the line and writing directly to those who may be affected by the work”, say Network Rail. Finally, the Midland is joining the electric revolution, albeit a little late to the party.

Quality of supply chain, intermodal, etc. is dependant of Weak Link.
Modes, those resilient, upgrade for added load and lower costs… Railways, short of resiliency, currently has to rely on longer trains, for adding load capacity. Obviously this is not a sustainable option, in particular as quality of service rendered is low, too low.
For sustainably proving intermodal, high quality, high capacity, etc., a shift, is needed! (Regrettably, current “upgradings” just are “cementing”.)