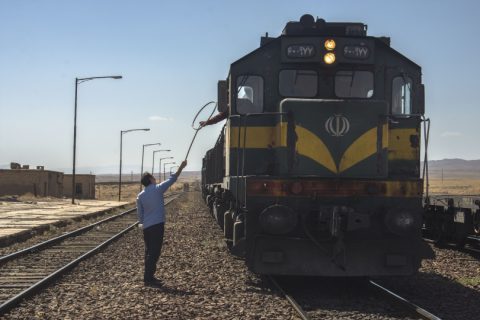 A new agreement between Russian Railways (RZD) and the Islamic Republic of Iran Railways (RAI) will boost the transit volumes between Russia and India via Iran to 12 million tons of cargo per year. The previous agreement targeted 10 million yearly tons; however, the corridor’s growing significance provides space for more.

The deal was reached between the heads of the state-owned railway companies on the sidelines of a Coordinating Council on Trans-Eurasian Transportation (CCTT) meeting held in Moscow. “With the targeting of 12 million tons of transit in today’s agreement with the head of Russian Railways, a new page is opened in Iran’s international rail relations,” commented Miad Salehi, the head of RAI, to his country’s public broadcaster.

Russia has even bigger plans

The increase in transit volumes via Iran is significant since the Moscow-Mumbai corridor (also known also as International North-South Transport Corridor) is still under development. Indicatively, the first official and regular freight train service by RZD commenced less than a month ago, in late October.

The doubling will take place by launching new routes and utilising INSTC’s potential to connect to East-West transit routes which could also include countries in the Middle East, Southeast Asia and Asia Pacific regions. Whether those plans will prove realistic is still to be explored because, according to a study and estimations of the Eurasian Development Bank (EDB), even with the incorporation of East-West routes, the INSTC would just win an extra capacity of roughly 5 million tons on top of its maximum capacity meaning that the 35,4 yearly tons of cargo could be far from reality.

Could China-Russian traffic also benefit from the corridor?

In the same meeting of CCTT where the Russo-Iranian was ratified, participants expressed some interesting opinions on the future and potential of the INSTC. For instance, according to the Russian media outlet PortNews, Irina Olkhovskaya, director for port and rail projects at the Ural Mining and Metallurgical Company (UMMC), stressed that connecting China and St. Petersburg multimodally via the port of Bandar Abbas and, respectively, Iran and the INSTC, could help alleviate the pressure off the rail route Vladivostok-Yekaterinburg-Moscow.

According to Olkhovskaya, the specific route carries out most China-Russia traffic and faces multiple issues. Her proposal focused on turning some volumes from rail to sea and sending them from China to Bandar Abbas and from there to the north and St. Petersburg. The transit time in such a solution would be 49 to 59 days compared to the 40-45 days through the traditional route, yet it would still be valuable in resolving some bottlenecks.

In any case, the overall picture regarding the Moscow-Mumbai corridor is clear. The fact that different companies explore all these possibilities is indicative of the corridor’s potential. Even if half of these plans reach the implementation stage, it would still be a significant success considering that until a year ago, the INSTC was not included in any major projects.