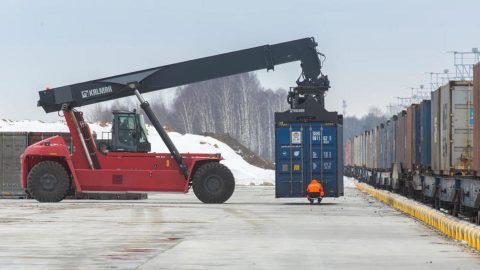 This was said by Andrei Belousov, First Deputy Prime Minister of Russia at the Transport Week 2022, which took place from 14th to 19 November in Moscow. The INSTC is not the only corridor Russia wants to expand. It also wants to increase the total capacity in the Far East direction (including highways) to 350 million tonnes per year, and cargo traffic on the Azov-Black Sea transport corridor to 300 million tonnes per year by 2030.

From Moscow to Mumbai

The International North South Transport Corridor links India and Russia by ship, rail, and road via Iran. North from Iran, there are several options. What started with a corridor transiting Azerbaijan to reach Russian territory (the western branch) has developed to a three-branch network, with additional route options via the Caspian Sea (middle branch) and Turkmenistan (eastern branch).

The development of the corridor took off slowly, with many missing links affecting the efficiency of the multimodal route. However, Russia has accelerated its efforts to make this route a success this year, as it was cut off from the west by sanctions. Ever since, several multimodal services have been launched between Moscow and Mumbai.

The capacity of the corridor should be increased by developing new routes, the prime minister explained. “New through routes will serve as a strong foundation for expansion of international trade. Russia is already building up communication with friendly countries, primarily with those in the Middle East, the South-East Asia and the Asia Pacific Region”, he was quoted as saying by the Russian media site Port News.

“Why is it (North-South corridor) so important? Because it crosses several East-West transit corridors including those going round Russia. Therefore, that corridor lets in a number of transit flows and, in the future, if we succeed, change the entire global logistics of transport flows”, he added.

It is noteworthy to state that the Eurasian Development Bank (EBD) recently published a report in which it estimated the aggregate potential of the INSTC in terms of container freight traffic to be 5.9–11.9 million tonnes by 2030, including all three main routes and all modes of transport.

“If the INSTC connects with the Eurasian east-west latitudinal transport corridors, the impact might be equivalent to 127,000–246,000 TEU (2.3–4.4 million tonnes), or about 40 per cent of total potential container freight traffic”, it concluded. This is significantly lower than the volumes projected by the Russian government.

It did state: “The north-south freight traffic is more likely to increase due to the current geographical and commodity structure of foreign trade flows among the countries favouring the corridor. By 2030, total railway container traffic may range between 9 and 18 pairs of container trains per day.”