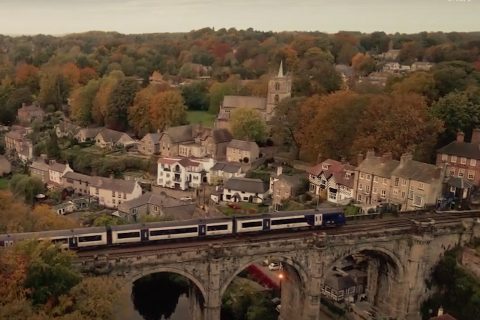 Published on 17-11-2022 at 06:10
Northern Powerhouse Rail connecting communities Image Transport for the North

Off. On. Off. Northern Powerhouse Rail, the proposal to build a dedicated high-speed line to connect major cities in the north of England, is once again in peril of cancellation. That comes after a commitment made by short-lived prime minister Liz Truss was reversed by her successor Rishi Sunak. An interview given by the new chancellor of the exchequer Jeremy Hunt, confirmed as much when he rubbished the concept of boring new tunnels under the Pennines, the mountain range known as the spine of England.

Hopes were raised among stakeholders that with the change of prime minister, the much anticipated dedicated high-speed line connecting northern English ports and economic centres would be built after all. However, that proved a false dawn. The economic gloom inherited by Rishi Sunak forced a u-turn amid much anger from the region. It seems the project, sometimes called HS3, is stillborn, and the North will have to make do with an upgrade to the existing lines, which is already underway.

The backbone of economic regeneration

It was hoped by a consortium of interests, including Transport for the North, that the ‘on-off’ HS3 project would finally get an irrevocable green light. The line, between Manchester, Bradford and Leeds, with possible extension coast to coast from Liverpool to Hull, would be the backbone of transport in the region and the key to economic regeneration.

“We will wait to see in two weeks’ time what the Autumn Statement says”, responded Lord Patrick McLoughlin, the chair of Transport for the North, the sub-national body with responsibility for the region’s connectivity. “The Chancellor [Jeremy Hunt] made clear in his first statement to the House of Commons last month that he sees capital spending as vital to a credible economic growth strategy. As TfN’s research has shown, on those terms alone, Northern Powerhouse Rail is beneficial to both the national and northern economies.”

Abandonment of the government agenda

In a reversal of fortune, Rishi Sunak, the new prime minister, has said he is not taking on the additional commitments made by his predecessor, Liz Truss. As reported by the Financial Times, he has said he is reversing her promise to build the Northern Powerhouse Rail scheme in full. This has left stakeholders in the North furious at what they see as an abandonment of the government’s own ‘levelling up agenda’ – a manifesto commitment to improve the economic performance of areas out-with the overheated London and the South East.

In an interview with the BBC, subsequently widely reported, chancellor Jeremy Hunt rubbished the opposition and made the case for abandoning the project. “There wasn’t really much point in going and blasting new tunnels through the Pennines”, he said. “The [existing and upgraded] line itself can deliver a 33-minute journey from Manchester to Leeds, quadruple nearly the capacity of that line, and do so without having to wait an extra 20 years beyond the delivery of what the upgrade can do.” However, critics have said that without the dedicated high-speed line, local, inter-regional and, critically, freight traffic will suffer. Any additional capacity would be taken up by a much more frequent intercity service – as eluded to by Hunt. To accommodate that, there would be precious little room for other services, argue the critics.

Government should revisit the evidence

According to Transport for the North, Northern Powerhouse Rail remains the best option for long-term sustainable economic growth in the North of England. “The last Conservative [party political] manifesto was clear on its commitment to build NPR”, said McLoughlin, himself a former transport secretary. “Furthermore, the Transport Select Committee recommended in August that the government should revisit the evidence base for the decisions that were made on NPR in the Integrated Rail Plan, and the Chair of that committee then is the new Rail Minister [Huw Merriman].”

Addressing the question in the UK parliament, chancellor Jeremy Hunt claimed the central responsibility of any government is to do what is necessary for economic stability. “Behind the decisions we take and the issues on which we vote are businesses investing for the future. The Government will take the difficult decisions necessary to ensure that there is trust and confidence in our national finances.”

This week, the Autumn Statement, which will lay out budget proposals for the foreseeable future, was due at the end of October. It has been postponed until the middle of November. That may well be when the coffin is renailed on NPR. Again.