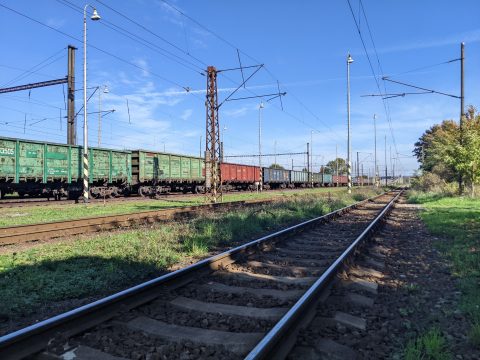 Not broad gauge to Europe, but normal gauge to Ukraine

“Today, the Commission together with the EIB is launching a pre- feasibility study to assess how to better connect the Ukrainian and Moldovan railway networks with the Trans-European Transport Network (TEN-T)”, the EIB states on 21 October. The study is carried out by the EIB technical advisory service JASPERS, which should have its first findings ready by May 2023.

The two countries currently have a broad gauge railway network, which is 1520 mm wide. In most European countries, the tracks are 1435 mm wide. This gauge difference means that cargo needs to be reloaded on the border, or wherever the gauge change occurs. This results in additional transit time.

Since the outbreak of the war in Ukraine, the European Commission has prioritised connectivity with Ukraine and Moldova. As part of this strategy, it included better connectivity with the countries in the TEN-T revision. The TEN-T network should be extended to Ukraine and Moldova from Poland and Romania, they argue. The extension of the standard gauge could facilitate this.

Although the TEN-T network is constantly adjusted and extended, the building of new railway lines is a costly and time-consuming development. Until now, the focus of the industry was more often on the extension of broad gauge towards Europe. For example, a consortium formed by ÖBB-Infrastruktur AG, Slovak Railways, Russian Railways and Ukrainian Railways considered extending the broad gauge line from the Slovak city of Kosice to Vienna in Austria. However, the funds were never collected, and with the start of the war in Ukraine, this project was cancelled.

The broad gauge line of Ukraine currently runs up till the Polish city of Slavkov, a railway line that is successfully operated by PKP LHS with the purpose of transporting cargo only. Other cross-border rail freight is transloaded on the busy border crossings.

“The project is an interesting one, as no other standard gauge lines cross Ukraine connecting two other neighbouring countries”, writes Volodymyr Shemayev on his Linkedin page. He is the director of the Office for International Projects at Ukrainian Railways, which fully supports the study.

Oleksandr Zavgorodnii, Chairman of the Expert Council at the All-Ukrainian Center for Transport Infrastructure Reforms comments on his post by saying that “it is necessary to weigh everything very carefully. It is advisable to implement the project only in the case of building a compatible or second track.”

“The EIB study on integration of Ukrainian and Moldovan railway networks with the EU is the first step towards a modern transport link between the EU, Moldova and Ukraine”, said EIB Vice-President Teresa Czerwińska, who is responsible for operations in Ukraine and Moldova.

“It is a strategic investment for sustainable, green economic growth, which also improves global food security. Integration of railroad networks will allow for easier and safer movement of people, goods and services between the three markets, and faster integration of the two countries with the EU.

“Finally, with Russia’s invasion of Ukraine and the blockade of Ukrainian ports, which induced a global food crisis of unprecedented scale, these new transport links will create a reliable alternative for food supply which will benefit the whole world.”