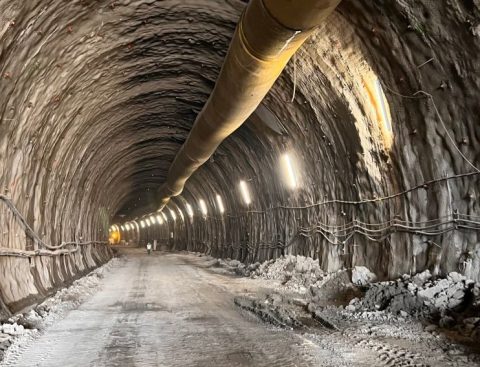 The construction of the Pekel Tunnel in northeast Slovenia is almost complete. The tunnel, located north of Maribor, is built on the Maribor-Šentilj railway line, which is undergoing an extensive upgrade. This line functions as a border crossing from Slovenia to Austria, and it is part of the TEN-T Baltic-Adriatic corridor.

One of the innovations of the Pekel tunnel will be the ballastless track, provided by Slab Track Austria; a company specialised in this kind of project. The design of the tunnel was developed by Elea IC between 2017 and 2018, and construction is expected to be finished by the end of 2023 when the whole line will be reopened. The Pekel tunnel will replace the Pocehova tunnel, which will be reserved for cycling.

The total investment for the Pekel tunnel will be approximately 50 million euros, and the project is co-funded by the EU. At its exit in Dragucova, the tunnel will be connected to the Pesnica viaduct, which is under construction as well and will be the longest viaduct in Slovenia, measuring 896 metres.

‘Closing the freight gap between Slovenia-Austria’

In the new tunnel, trains will be able to travel at a speed of 120km/h against the 80km/h allowed in the old tunnel. Once the Maribor-Šentilj line will be completed, capacity is expected to increase by 30 per cent, namely 90 daily trains. As Slab Track Austria claimed, the project’s completion will signal the “closing of the gap in freight traffic between Slovenia and Austria.”

In addition, the new track in the tunnel and on the viaduct, provided by Slab Track Austria, will be ballastless. The slab track will also be implemented in other sections of the line. This means that instead of the classic ballast and sleepers, the infrastructure will be made with concrete. Ballastless tracks have various advantages, such as a longer life span and a lower need for maintenance.

Once complete, the tunnel will be a little over 1,500 metres long and suitable for P400 semi-trailers. Initially, the tunnel and the viaduct will be equipped with a single track, but not for long. As the State Secretary at the Ministry of Infrastructure, Alenka Bratušek, was quoted on Slovenian Posts, by 2030, there will be the implementation of the double track.