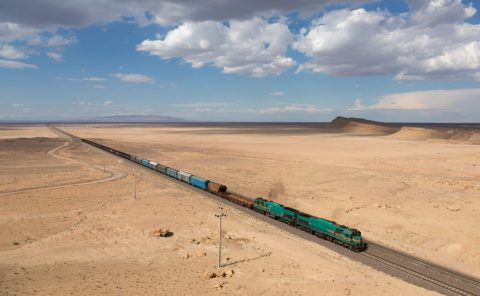 The construction of the Rasht–Astara railway in Iran is 70 per cent complete, and should be delivered mid-2023. This is according to the Russia Briefing. The Rasht-Astara railway line is considered the missing piece on the International North South Transport Corridor, linking Russia and India via Iran and Azerbaijan.

Around the same time last year, there was little hope the missing link would be completed at all, as the Iranian government had stagnated the project for months. “The involvement of Russian construction assistance financed by Iranian oil will bring the completion of the route forward to mid-2023”, mentioned the news outlet.

Although Iran had completed the section linking Astara in Iran to Astara in Azerbaijan in 2019, the missing section on its own territory received less attention. Instead, it had pinned its hopes on the existing infrastructure through Armenia and Azerbaijan to be re-opened, as this would connect the puzzle pieces on the corridor as well.

Political tension between these neighbouring countries however made the re-opening of this piece of infrastructure little concrete. A newly elected government in Iran last year reinforced the importance of the Rasht–Astara connection, and it is now moving ahead.

The same government has approved the construction of the Rasht-Caspian port railway as a separate rail route section for combined cargo transportation to Russia and the Caspian Sea countries. This is a welcome extension to the Rasht–Astara connection.

About one-third of the railway line connecting Rasht and Bandar Anzali in Iran has been constructed. 11 out of 35 kilometres of track are in place already, and the line’s construction proceeds, to be be inaugurated next year. With this line, the Caspian sea has become another part of the puzzle linking Iran to Russia, Central Asia and Iran.

Recent shipments along the INSTC have shown that multiple routes are viable. One shipment carried out in July departed from St. Petersburg for the Caspian Sea port city of Astrakhan, where it was reloaded to cross the Caspian Sea to Iran’s Anzali Port. Here, it was shipped by rail to the port of Bandar Abbas, for the final sea shipment to Mumbai in India.

Earlier shipments followed the land route up till the port of Bandas. For example, a shipment from Helsinki in Finland passed through Russia, Azerbaijan and Iran by rail before being transloaded to a vessel on the way to India. Both routes are receiving renewed interest, now that Russia is excluded by many customers on international corridors, most notably the New Silk Road.

1 comment op “The missing piece on the Russia-India corridor ready in 2023?”

Probably you remeber, I had once a presentation in Gdansk, Poland about the Silk Road.
I already sent feedback some weeks ago (Article from April 22) to your colleague. (The answer was, that the article was not developed by rail freight).
I wonder your sources: The Rasht-Astara Railway is not even under construction yet.