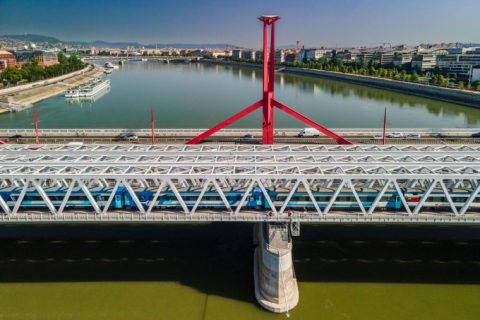 Since last week, three railway tracks cross over the Danube river in Budapest, resulting in a capacity increase of the Danube Railway Bridge. The new bridge connecting Buda and Pest in the Hungarian capital was inaugurated on Thursday 4 August and forms part of several TEN-T corridors in Europe.

After nearly a century and a half, a new chapter opens in the life of Hungary’s first railway bridge over the Danube. The original structure stems from 1877, but it was rebuilt several times to increase its capacity. By the beginning of the 2010s, these structures had deteriorated, and the plan was born to build an upgraded, three-track railway bridge.

The bridge is an important railway link for both passenger and freight trains. According to national railway company Magyar Államvasutak (MÁV), ninety per cent of the rail traffic between the eastern and western borders of Hungary, including transit traffic, passes over the Danube Bridge of the Southern Railway Link.

“Three of Europe’s most important trans-European railway corridors pass through here. They connect the Dutch ports and Spain with Romania, the Black Sea, the Balkans or Ukraine”, said Dávid Vitézy , the Hungarian secretary of State responsible for transport at the Ministry of Technology and Industry during the inauguration.

“On average, about 100 freight trains and 140-150 passenger trains cross the 500-meter connecting railway bridge every day, and by June this year, 1.7 million domestic passengers had already crossed the Danube in this way”, added Zoltán Pafféri , the president and CEO of MÁV.

Construction of the three-lane bridge started in 2019. Two floating cranes arrived in September 2020, with the help of which the first element of the first structure could be lifted in. This was followed in quick succession by five other bridges, which made up the first superstructure, according to a meticulously planned choreography. The first of the three new bridge structures was handed over to traffic on April 25, 2021.

At the same time, the middle bridge was demolished and then rebuilt. For this, six bridge elements had to be lifted into place on site, using water maneuvers. Traffic could start on the second new structure on December 11, 2021, while the demolition of the old bridge structure on the southern side also began.

On May 4, 2022, the last piece of the puzzle, the so-called closing member, was raised, thus making the new, third structure of the Southern Railway Danube Bridge passable. After successful test loads, a historic moment was reached on 4 August: three railway tracks crossing over the Danube.

Traffic only on newest structure

Until the completion of the third track to be built in the next phase of the Southern Ring Railway, rail traffic will take place on this newest and middle structure.

The development of the Southern connecting railway Danube bridge is carried out on behalf of the Ministry of Technology and Industry at a net value of 36 billion Hungarian forint (almost 92 million euros). It is part of the Southern Circular Railway, the main railway line passing through Budapest and connecting the capital to the rest of the network.

RailFreight on Tour in Hungary

Are you interested in learning more about rail freight in and around Hungary? Join us at the RailFreight on Tour edition in Debrecen, Hungary on 19 and 20 October.

In the past few years, Hungary has made a huge leap forward, in terms of infrastructure, facilities and services. Hungary should be placed on the international rail freight map once again, is the consensus, and there is no time to waste. During this summit, the possibilities of rail freight in and around Hungary will be discussed in length.

Do you have a topic to be presented, or an idea to be discussed and would you like to be on the programme? Send an email to news@railfreight.com, and maybe you are part of the summit as a speaker this October.