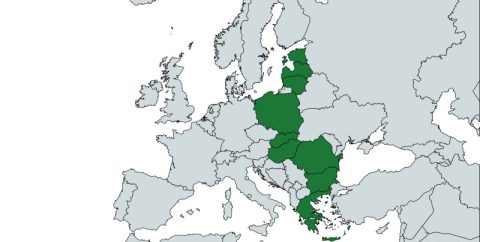 Published on 09-06-2022 at 13:24
Map of the countries involved in the North-South corridor. Source: Mapchart.net/RailFreight.com

The possibility of a North-South European corridor connecting the Black and Aegean Seas with Lithuania might be closer than we think. Lithuania’s deputy transport minister Julius Skačkauskas and Polish transport minister Andrzej Adamczyk discussed how the two countries could collaborate in such an initiative to assist Ukrainian exports and develop it further in the future.

The two politicians met in the context of the 3Seas Local Government Congress and Economic Forum held in Lublin this week, reported the Latvian information agency LETA. Their discussion points focused on how Lithuania can be included in the Three Seas Initiative, but with a twist.

Now, why is there a twist? Skačkauskas and Adamczyk explored the possibility of extending the initiative to Lithuania and the Aegean sea, meaning Greece. They intend to establish a North-South transport corridor linking the Aegean and Black seas to Lithuania via Greece, Bulgaria, Romania, Hungary, Slovakia and Poland.

More important than ever

“The North-South transport corridor connecting the three seas — the Baltic, Black and Aegean — is more important than ever and must be multimodal, connecting both roads and European gauge railways. We support Poland’s proposal to extend this transport corridor to Lithuania. The current geopolitical situation dictates the need also to foresee new, additional transport corridors and infrastructure connections between Lithuania and Poland, ensuring alternatives to the priority projects of Rail Baltica and Via Baltica. One such possibility is the development of the road through Lazdijai, which would allow creating two strategic connections across the border between Lithuania and Poland, strengthening logistics chains and military mobility,” said Skačkauskas.

The parties involved aim to create a transit corridor bypassing Belarus to transport goods under minimum checks and accelerated customs procedures, minimising existing infrastructure and bureaucratic obstacles. “It is vital that transport companies are involved in this process and that operators work to coordinate freight transport, allocate transport capacity and establish timetables”, agreed the two ministers.

“Such a project, of course, involves some hurdles that the partners need to overcome. For instance, route planning should be as efficient as possible, while the parties need to invest more in resources like platforms, wagons, locomotives and loading equipment. The countries envisage specific solutions of varying complexity that could speed up Ukraine’s freight transport process.

Are you interested in learning more about Lithuania, the developments taking place there and its business potential? Do you want to get informed about the new routes linking the country with Western Europe? Next week, on 14-15 June, we organise the RailFreight On Tour-The Lithuanian Edition in Vilnius, where we will discuss the possibility of a profitable rail business in Lithuania and the broader Baltic region.


Do you want to receive our newsletter? Fill in your email address below:

1 comment op “From the Aegean Sea to Lithuania: is a North-South corridor for Ukraine in the making?”

Just go for it! Multi modal railways, when at it’s best!
However decisively, offensive! Nothing but double track, etc.!