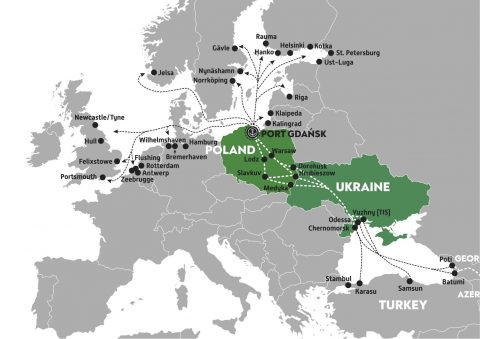 Black Sea to Baltic: how far is it from being realised?

Two months after the initial proposal for an intermodal corridor extending from the Black Sea to the Baltic, the situation looks more concrete than a vague suggestion. The possibilities concerning the corridor’s establishment are favourable since it will provide a reliable alternative to existing solutions. It seems that the Port of Gdansk and Poland are ready to move forward. However, missing rail links through Ukraine and Turkey’s role in the following years are crucial for the project’s completion.

These insights were shared during a webinar organised by the Port of Gdansk last week. The webinar dealt with the future intermodal route and hosted attendees from the rail and maritime sector. Additionally, other ports among the participants, apart from Gdansk, discussed the benefits of the potential connection.

Did you miss it? Parts of the webinar are shown today at RailFreight Live. This broadcast starts at 1pm CEST and can be seen here.

The discussion around a ‘Black Sea to Baltic’ corridor between Poland and Ukraine began last December. Following a letter of intent between the two countries, the Port of Gdansk and the Ukrainian Sea Ports Authority agreed to compose a joint working group that would make the first identifying steps for the enterprise. In what state are the procedures currently?

Gdansk ready to take off

According to Slawomir Michalewsi, VP of Finance at Port of Gdansk, the Polish port finds itself on a continuous growth track during the last years. It is between the four largest Baltic ports and the second in terms of handled containers. Last year it handled 48 million tonnes of cargo, while it raised the bar to 60 million tonnes for the following years.

Moreover, Michalewski acknowledged the fact that traffic between Poland and Ukraine has grown significantly between 2018-2020. That is why Gdansk has intensified investments in upgrading its railway system, by constructing eighty kilometres of new tracks and upgrading three cargo stations. The same applies to the whole Polish railway system and the border crossings Medyka and Dorohusk, which are ready to handle the increased capacities and traffic. In general, as Michalewski concluded, “access to the port is already ready, we just expect our Ukrainian counterparts to take action”.

Turkey and a missing link

As mentioned previously, the purpose of the ‘Black Sea to Baltic’ intermodal corridor aims to facilitate the transportation of goods from the broader area of the Black Sea, to Poland, the Baltic ports and Scandinavia. Transport between these destinations occurs either via long sea routes crossing the Mediterranean and reaching the northern territories of Europe or via the Adriatic corridor, with sea vessels reaching Italy and then transhipping cargo to road or rail haulage.

Consequently, links between the two areas of interest already exist. On the other hand, short-sea connections between say, Turkey and Ukrainian ports, also operate regularly. As Aleksey Panasiuk from the Ukrainian Sea Ports Authority (USPA) underlined, it is a concrete strategy of USPA to attract cargo flows to Ukrainian ports, and Turkey seems to have a central role in this sense. The Eastern Mediterranean country is growing rapidly and aims to become a central hub for Eurasian transport. Its role will be crucial for establishing the intermodal connection between the Black Sea and Baltic. Depending on its production rates and expansion views, it could become a prominent player in the project.

What is missing then for the whole plan to take flesh and bones? Dominic Landa, Commercial director of DCT Gdansk, defined the missing link as Ukraine’s railway system. In particular, infrastructure in Poland is ready, sea connections in the Black Sea exist, and the same goes for interconnectivity between Baltic ports. The project only needs the essential rail links between Ukrainian ports and Poland to be fully functional. Maybe this could be a potential barrier in the realisation of the plans. However, a smaller scale example proves that the project could indeed be successful.

On 24 December, the Ukrainian Railway Transport Service Center “Liski” signed a memorandum of cooperation with Ukrferry and FerriPlus to establish a multimodal Turkey-Ukraine-Poland route. The route will connect Turkey with the Ukrainian port of Chornomorsk and the rail terminal of Slawkow in Poland. From there, cargo can get distributed to other European destinations.

The fact that the specific connection will begin its operations in the following weeks, during Quarter 1 of 2021, is a positive indication that plans for a larger-scale project can indeed be successful. On top of that, it proves that apart from the port of Odesa, that was supposedly the central Ukrainian hub of the intermodal corridor, there are other alternatives too. After all, as Umur Ugurlu, Senior VP/ Regional Manager at LAM Shipping Agencies, mentioned, “Chornomorsk is one of the best connections to Eastern Europe for Turkey”.

Interestingly enough, among the webinar’s highlights was the presence of two Swedish ports: these of Gävle and Norrköping. The two Swedish ports followed a common line in presenting the benefits of the potential ‘Black Sea to Baltic’ connection, and how it could and should extend to Scandinavia. Not only are Scandinavian ports willing to connect with the corridor, but they also claimed that they could become the end destination since they can offer much both in terms of exports and imports.

The situation so far, and according to the online gathering, seems promising enough, with all parties concerned ready to take the next step in implementing the initial plans. The intermodal transport sector will probably learn about the project’s future soon enough, after resolving hurdles concerning the Ukrainian rail leg of the corridor to be.