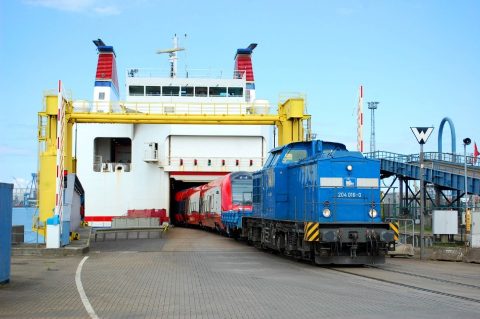 Rail ferries: is there space for them in intermodal transport?

Rail ferry links are not the most common when it comes to short sea transportation. The ban of pocket wagons from the Great Belt Bridge and, a little later, all of Denmark re-introduced them to the public. Stena Line was among the first to react to the traffic disturbance in Scandinavia by transferring whole trains across the water between the ports of Trelleborg (Sweden) and Rostock (Germany). “The case with the bridge is an indication that rail ferry links are here and maybe should attract more attention”, said Ron Gerlach, Managing Director of Stena Line Germany.

Stena Line is probably the last rail ferry operator in Europe currently. By examining the options that rail ferries offer, like transporting whole conventional or intermodal trains without loading and unloading cargo procedures, one could argue that they constitute a perfect solution for multimodal or intermodal transport. Is this the case, however?

As mentioned before, rail operators active in Scandinavia are experiencing a heavy impact in their endeavours, due to the ban of pocket wagons with semi-trailers from Denmark. They had to quickly adapt to the situation and develop alternative routes to keep cargo running until the investigation concluded. So far, this situation costs at least an excess million per week to the sector, which hopes that rumours concerning the reestablishment of traffic under specific conditions are true.

Stena Line stepped in and grasped the opportunity to offer an alternative for stranded operators. “If we judge from the number of requests that we receive”, said Gerlach, “we understand that the rail sector is in a state of panic, because of the mass losses and the urge to meet the needs of shippers.”

The specific rail ferry link is operating for twenty years now. The company offers frequent connections between the two ports with three departures in each destination per day. Additionally, it possesses two of the world’s biggest rail ferries that provide rail capacities of a thousand meters each. Depending on the train’s length, the ferry’s loading procedure takes about 90 minutes in total. After loading the train onboard, the locomotive leaves the boat. In the destination port, another locomotive unloads and carries the train to its route.

Stena Line cooperates with various rail operators, but recently, it acquired two significant partners from the European market. In fact, the new partners see the service with a long-term perspective. “We are no longer a Plan B solution but a valid option”, commented Gerlach. The company carries many years of experience, and the trust that rail operators put on it indicates that rail ferry services are indeed reliable. If this is so then why don’t we see more similar options in the European transport market?

As Ron Gerlach mentioned, rail ferries are relatively uncommon because modern ferry business aims to be agile while also paying attention to shipyard tonnages to meet the customers’ needs. Moreover, rail ferries do not allow for much flexibility as their operators are mostly ‘locked’ between two ports. Finally, building a rail ferry is more expensive than building a conventional one while their travelling costs are five per cent more expensive.

On the other hand, transporting whole trains on ferries, primarily for short-distance sea operations, could be more efficient than standard transhipment procedures. Speed is the main characteristic of the service, together with the fact that trains remain intact during the trip. Nevertheless, for the specific type of transport to expand more in the future, there is an urgency to communicate its benefits substantially, since it needs further investments in port infrastructure to be fully operational.

The greatest lesson from the ban in Denmark is that reliable alternative solutions exist. Ron Gerlach underlined that connections between rail and sea are the most environmentally friendly logistics concepts and that cooperation between the two modes should grow.

In particular, rail ferries might not constitute the most used solution because they face commercial related hurdles. Nonetheless, from the perspective of logistics, their concept is not that unfeasible. Their direct association with rail could make them more attractive to the intermodal sector, which is their central goal. After all, as Gerlach concluded: “The way that rail operators promote rail transport, makes us want to support it and take it a step further”.