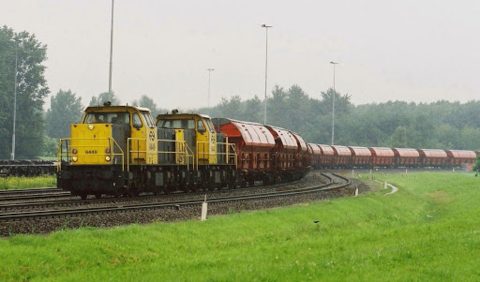 The shuttle train linking Coevorden in the north of the Netherlands with the Port of Rotterdam (Maasvlakte and Waalhaven), is to increase its roundtrips from three to six this year. The Coevorden shuttle had the same number of services in the past. However, it witnessed some drawbacks due to a combination of factors. Currently, operations are cost-effective, and the conditions seem optimal to return to past standards.

Brexit played a crucial role in the decision to add more weekly services for the specific line. Storing demand due to border procedures has grown significantly. Simultaneously, the Euroterminal positioned at the Dutch-German border has the needed capacities to meet the new needs and contribute to the distribution of cargo towards the European hinterland, explained Rob Spierings, Manager Strategic Bussines Development, Bentheimer Eisenbach A.G.

Additionally, Germany’s decision to invest more in rail during 2021 also affects Euroterminal’s operations, because it is bordering with the country and heavily using its infrastructure through its services. As a result, it can apply for subsidies that will boost its operations even more. This development is also vital for the Coevorden shuttle because financial support is critical to keep the project’s high frequency.

In the last two years, the Euroterminal in Coevorden saw numerous investments related to digitalisation, interoperability, and security standards. Apart from intermodal traffic, which is the primary component of its operational area, the terminal is also ready to increase conventional rail freight traffic through its facilities.

Nevertheless, according to Spierings the principal goal is to balance the import-export flows to and from Rotterdam’s port and avoid situations like returning empty containers. The forthcoming doubling of trips between Rotterdam and Coevorden seems to indicate such a development.

Coevorden’s Euroterminal also has a frequent connection with Scandinavia and the Swedish city of Malmö that runs three times per week. As of 1st of April 2021, the service will acquire one more weekly roundtrip, and if stable, it could reach five trips in the future.

The expansion to Scandinavia is proof of the eagerness in Coevorden to launch more corridors. Shortly, Poland or even China could become new destinations on the map of the Euroterminal. Everything will depend on the success and resilience of the existing connections.

With the increased roundtrips the shuttle’s volumes will increase from 24,000 TEUs per year to 48,000 TEUs. Additionally, it will remove around 24,000 full truckloads (FTLs) and about 6 million kilometres from road transportation. This will reduce CO2 emissions by 9,500 tones yearly. As the company points out, this contributes to the modal shift even in shorter distances.

The Coevorden Shuttle is the product of collaboration between RSC Rotterdam and the Euroterminal. It is unique in the Netherlands due to the covering of a short distance by rail, which would otherwise get covered by road haulage.

The connection is suitable for cargo owners who want to transport containers sustainably and reliably from Northern Europe to Rotterdam. Furthermore, it is also part of the ‘Joint Corridors Off-Road’ national programme which aims to upscale and optimise the shuttle’s services, while attempting to attract more shippers from road transportation.