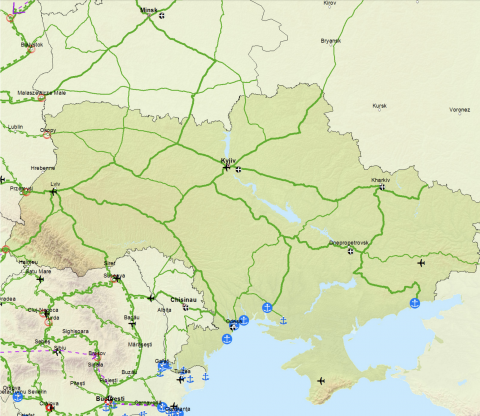 Ukraine has been through many difficulties during the past few years. Economically wounded by sociopolitical unrest, the country is currently trying to find its way back in the markets. The transportation sector is one of the objectives that it is trying to improve mainly with a focus on rail freight. Timofey Murakhovsky, from the Ukrainian Railways, shared with the public some of the struggles and possibilities of the Ukrainian rail sector during the European Silk Road Summit 2020.

During 2020 Ukraine saw the establishment of a regular train connection between Kyiv and China. The country is currently receiving four trains per month coming from the east. At the same time, Ukraine functions as a transit country for EU-China freight traffic. However, there are more steps ahead for the eastern European country to reach its full potential.

A part of the interview with Murakhovsky will be broadcasted on RailFreight Live this Friday, 27 November. This show starts at 1pm CET and can be viewed any time after on our YouTube Channel.

In 2014 the country witnessed one of the darkest pages in its contemporary history. The outbreak of war in the eastern Russia-bordering region of Donbass caused an excruciating socioeconomic impact. Part of the heavily disrupted normality was, of course, Ukraine’s transportation sector, which on that year saw its transit volumes decreasing dramatically.

Six years later, the conditions are significantly better. Stability and security are returning in everyday life, and the economy is growing impressively fast. Respectively, container transportation via railway is also increasing, almost up to 20 per cent every year. Consequently, given the situation, there is an “immense potential for transport to grow”, even more, said Murakhovsky.

For the transportation sector of Ukraine to develop, there is a need for cooperation and involvement of multiple factors.

Firstly and most importantly, even though Ukrainian Railways demonstrate constant financial improvement, there is always a need for further support schemes. It is in the hands of the Ukrainian Ministry of Infrastructure to invest more capital and attract foreign investors for the benefit of rail infrastructure.

At present, the country is looking forward to improvements on its rolling stock, terminal capacities, and tariff policies. If changes get implemented, then the Ukrainian transport market will become more attractive and will offer possibilities for the quicker and better transportation of more trains. Private companies have already displayed an interest in undertaking development projects, and this is a very positive sign for the future.

Additionally, Murakhovsky stretched the importance of addressing issues such as the establishment of Chinese cargo traffic. Since Ukrainian shippers are mostly used to shipping via sea, railway shipping is still considered to be a novelty. Subsequently, there is a need for a mental shift towards rail that can be achieved through lots of promotional marketing work with the clients. Moreover, the importance of “cultural exchange”, as he said, offered by exhibitions, conferences and round tables can also play a crucial role in that.

What Ukraine can offer

On its behalf, Ukraine and its railways seem to have a lot to offer concerning Eurasian rail traffic and the decongestion of corridors. For instance, because the Brest/Malaszewicze border crossing is currently handling all the westwards traffic from China, Ukrainian Railways consider that Belarussian infrastructure is reaching its limits. Using Ukrainian Railways as an alternative could, thus, facilitate traffic and improve the quality of services. The regularity of freight turnaround from China, together with the establishment of a new rail service from Poland to Ukraine (Mostyska), last April, is indicative of the potential that the country has to function as the next transit route between the EU and China.

Therefore, Ukrainian Railways have set a goal of proving that they can be a reliable partner providing quality and accessibility. Even though the country’s image has been negatively influenced by the political developments of the last decade, its services are improving. Ukraine has opened its gates to freight transportation again, providing security for transit trains and welcoming potential partners to work together.