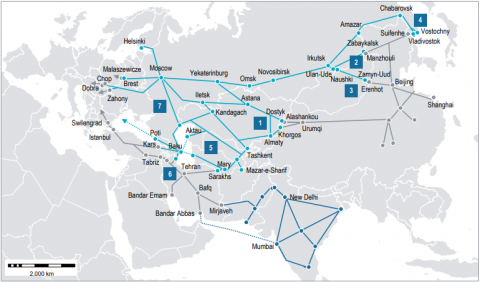 Japanese cargo on the way to Europe via Trans-Siberian railways

Backed by Russian subsidies, a new container train carrying Japanese cargo departed for Europe on 18 November, using the Trans-Siberian railways. The train, which left from the Russian port of Vladivostok, is now headed for  Brest/Malaszewicze. Here, the containers will get loaded onto a narrow-gauge train and reach destinations that include Poland, Germany, the Netherlands and Belgium.

The new service is part of a joint project between the Russian Railways and the Ministry of Land, Infrastructure, Transport and Tourism of Japan. The transported cargo consists of a variety of products, such as medical equipment, motor and climate-control equipment, chemicals, power tools and compressors. For the first itinerary, products were shipped to the Commercial Port of Vladivostok from different Japanese ports, through a stable maritime service provided by FESCO.

Speed as the main feature

One remarkable fact concerning the new service is the speed of the preparation processes before the trip. Specifically, the preparation of transit documents, the customs processing in the port and the composition of the train took only two days to complete.

Moreover, the service will use the Russian Railways network but on a specially adjusted schedule. In combination with the use of the Trans-Siberian route, transportation times will be significantly reduced. Delivery times from Japan to Europe will be cut in half compared to the ones offered by traditional sea routes.

Regarding the logistics aspect of the service, it will be provided by RZD Logistics, a subsidiary of Russian Railways, and FESCO. Both companies aim for a service that will contribute to the express delivery of goods via the Trans-Siberian railway.

“High quality, speed, and safety of transportation” constitute the main characteristics of the new service, said Alexey Shilo, Deputy General Director of Russian Railways and Head of the Centre for Corporate Transport Services. Furthermore, he mentioned that the decision of the Russian government to “subsidise the transit transportation of containers when shipped from ports of the Far-East”, could create more opportunities in increasing traffic from Japan and the broader Asian region to Europe.