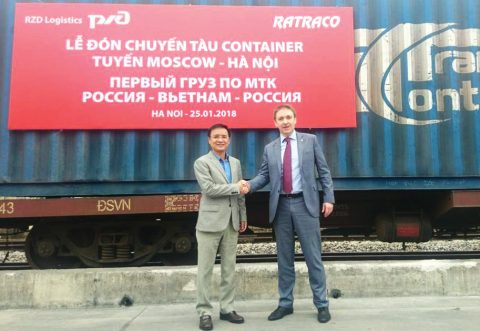 RZD Logistics, the freight arm of Russian Railways, and its Vietnamese partner Rataco, ran the service between Vorsino Freight Village in Russ and Vietnam’s capital, Hanoi.

The container train packed with cosmetics from Russian manufacturer Red Line took 20 days to make the run, and arrived in Hanoi on January 23. RZD said it would have taken twice long to transport the goods by sea. It was part of a bilateral agreement signed in July last year by Russian Railways and Vietnamese Railways (VR), which has a 35 per cent stake in Ratraco.

Viaceslav Valentik, CEO of RZD Logistics said: “We have made the whole way from the idea to its implementation in a short time thanks to the efforts of our high-class specialists, who invested lots of time and effort into this project, even during the new year holidays. We are happy to make our contribution to the development of trade relations between Russia and Vietnam, especially in such an important sphere as the export of Russian goods with a high added value.”

RZD organised the transport, first by road from Red Line’s warehouse, and then by rail at Vorsino. Far East Land Bridge took over the shipment at at the Manchuria-Zabaikalsk border point, before organising transport across China. Ratraco then handled the final stage across Vietnam.

Svetlana Marahovskay, Director General of Red Line LLC, said: “We have been exporting our products for 15 years now and since recently have been actively working on Asian markets. Red Line cosmetics is popular in the CIS region and Baltic countries, as well as in European, Asian and Arab states. This shipment was organised in order to coincide with the opening of our shop in Hanoi. The south-east Asia market potential is very high – it is growing year by year, offering us a wide range of opportunities for future cooperation.

“Asia is a very diverse continent from many points of view: this refers to the wealth of its citizens and infrastructure developmen. Asia is heavily-populated, which opens great export perspectives for various goods, including our company’s products.