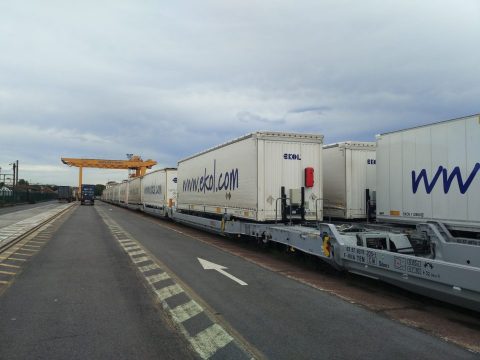 A new freight shuttle service between the south of France and Paris is a major step in the development of a north-south European corridor, and ultimately onto northern Africa. The route, from the port of Sete, will also be much more ‘ecological’ than road transport, say its providers.

The new connection by Ekol Logistics and VIIA will use the high-capacity or ‘mega’ P400 trailers, which are 4,000 millimetres high, a full 14 centimetres higher than those on the commonly used P386 routes across Europe. It is an important step not only in opening up routes to southern Spain and the Maghreb (northern Africa) region but also east to Hungary and Romania.

Wojciech Brzuska, General Manager for Ekol Europe, said: “Our strategy is to have more and more train connections within Europe so this new Ekol train is the next step for us. Transit time is similar to transport by truck, but of course the rail service is much more ecological. Only thanks to this new connection between Sète and Paris will we monthly emit 180,000 kgs CO2 less, which means ‘saving’ a forest the size of twenty football fields.”

Daniel Lebreton, Sales Director of VIIA, said: “We are delighted to expand our relationship with Ekol on this new and unique rail-sea link between Turkey and Paris via the Port of Sète. Discussions are ongoing in an effort to offer various destinations in northern Europe.”

Bogna Blasiak of Ekol Europe Corporate Communications, added: “What we are talking about is the south-north corridor, which is very large in scope, from the Maghreb and Spain in the south to Benelux, Germany and the UK in the north. We consider France like a big hub for our future development to this new corridor, and in particular at Sète.”

The service will leave Sète, near Montpellier on the south coast, on Wednesday morning and arrive in Noisy-le-Sec, in the eastern suburbs of Paris, on Thursday at 7am. The return trip departs from Paris on Wednesday at 6pm and arrives in Sète on Thursday at midnight. It will shortly be increased to two trips a week.