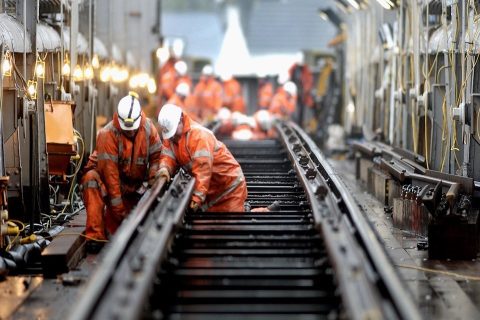 Published on 02-12-2022 at 10:00
Engineers at work on the railway in BritainImage Network Rail media centre

The UK government’s Department for Transport has published its railway plan in England and Wales for the period of April 2024 to March 2029. This is known as Control Period 7 (CP7) and represents a regular update for operational development and maintenance of the railway in England and Wales. Network Rail commits to a budget of  44 billion pounds (around 53 billion euro) over the five year period. Separate arrangements are made in Scotland and Northern Ireland.

Every five years the UK government is required to set out what it wishes to achieve from the operations, maintenance and renewal of the railway. This is done through a document known as a high-level output specification (HLOS), and the funding available is set out through a companion document, the statement of funds available (SoFA).

The government now expects its infrastructure agency, Network Rail, to develop detailed plans to deliver on these objectives, working closely with its customers. These will then be subject to strong and effective scrutiny by the Office of Rail and Road, as independent regulator, to develop robust, credible, value for money plans for the next control period.

Network Rail to cost and deliver

The recently appointed secretary of state for transport, Mark Harper, has published (1 December 2022) the objectives and funds available for operational railway infrastructure in England and Wales for control period 7 (April 2024 to March 2029). Although incumbent on Network Rail to cost and deliver these objectives, there is the possibility that the agency will be superseded during CP7 by Great British Railways, a new over-arching management agency, which will assume its responsibilities.

“Maintaining and renewing our country’s rail infrastructure is critical to delivering the railway that passengers and freight expect, and for supporting economic growth”, said Harper. “The government fully recognises the critical role rail services played for business, key workers and our society during the COVID-19 pandemic, and the vital role they play in connecting communities and supporting economic growth.”

The high-level output specification makes it clear that the government will press ahead with rail reform. It says it will address the challenges facing the sector, such as fragmentation and outdated working practices, with a strong continued focus on operations, maintenance and renewal. “This strong continued focus is important in supporting a safe, efficient and reliable railway for passengers and freight customers”, says the DfT statement. “Achieving these objectives will be facilitated by significant government investment as set out in the statement of funds available, with Network Rail spending around 44 billion over the period April 2024 to March 2029.”

A direct comparison with the previous five year funding settlement (CP6) cannot be made because of some differences have been expressed in the way certain objectives are included. However, this new funding settlement appears to allow for a small increase in expenditure on Operations, Maintenance and Renewals (OMR) of the railway, in real terms.

Commitment to being open for business

Commenting on the documents, the Railway Industry Association said the Secretary of State has stated an expectation that Network Rail must work collaboratively with the supply chain and exercise its role as an effective and engaged client, demonstrating a commitment to being open for business.

“RIA welcomes this commitment from the UK Government, which appears to mean Network Rail can continue maintaining and renewing the railway in CP7”, said their cheif executive Darren Caplan. “Rail suppliers will clearly play a significant role in working with Network Rail to ensure the programme of work is delivered in the five years from April 2024. We now await Network Rail’s regional business plans, and the work of the Office of Rail and Road, to establish which work will go ahead, in which parts of the country, to understand the implications of this funding settlement and work together on delivering the CP7 workload as efficiently and effectively as possible.”

Unspecified, for meeting with the by clients “expected”… – for “maintenance and renewing” – quantity of billions is specified.
A “safe, efficient and reliable railway”, the needed “for supporting economic growth”, however urgently requested is.
(All other modes upgrade, for added load capacity and reduced costs, etc.)
As by nature, the vulnerable device – not robust, as neither resilent nor redundant – just for proving a timely device, now Industry is due for the Shift-
to a New Od Railway!