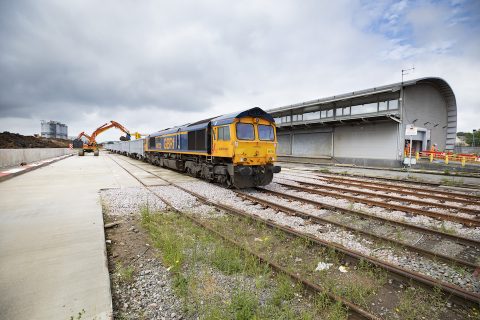 Published on 23-11-2022 at 07:30
First train loading to take away construction spoil to be recycled and reused around the countryImage HS2 Ltd

This month’s UK chancellor, Jeremy Hunt, delivered a long and detailed budget last week. Although dubbed an “Autumn Statement”, the epic two-hour delivery found no voice for the rail industry. That has been largely considered a plus point for rail projects, but the projects for a deep recession does nothing for the growth of the economy overall. That’s the train that’s coming down the line for the industry, or rather not coming down the line any more.

None fo the major rail projects currently underway met with a cancellation notice from Jeremy Hunt. Although with none of them anywhere near completion before the expected general election in two years time, there is still uncertainty. The on-off-amended-cutback saga of Northern Powerhouse Rail continues. The attenuated HS2 is still on track to Birmingham, while the MAnchester and Crewe extensions are, possibly still up for debate (the Eastern Leg to Sheffield and Leeds was long since ditched). East West Rail continues for now to make its sub-optimal progress between Oxford and Cambridge (or maybe just Bedford).

The Chancellor of the Exchequer delivered his Autumn Statement with a number of measures related to transport infrastructure, the railway industry and rail supply businesses. As part of the statement, the Chancellor confirmed that the core Northern Powerhouse Rail, East West Rail and HS2 to Manchester schemes are all set to go ahead. He also said that capital budgets will increase over the next two years to 2024, and then be maintained in cash terms subsequently. However, political opponents were quick to point out that Jeremy Hunt’s ability to deliver on all those statements is limited by the prospect of a general election in 2024.

Hunt also made dire predictions of a deep economic recession, the worst of which is expected in a cliff-fall in the next two years, with economic recovery not making a meaningful contribution until around 2027. The rail industry, both freight and passenger, would see a downturn in demand during such a recession. However, there are calls from within the sector for investment in rail, as a prime catalyst for recovery.

“Last month we wrote an open letter to Chancellor Jeremy Hunt”, said Darren Caplan, Chief Executive of the Railway Industry Association, the national trade body representing UK rail suppliers. “Rail is not just essential for UK connectivity and levelling-up, but that it is also an important national industry which plays a major role in boosting economic growth in other sectors too. Given this, we said it is essential to push on with rail projects, even given the current difficult economic circumstances.”

Nevertheless, political instability has led to dented confidence in the rail sector. While some other national infrastructure has been given the green light, such as the new nuclear power plant in Suffolk (Sizewell C), it will take a growing economy to grow the rail sector. The drive towards a net-zero economy will call for some renewals in the industry, as well as modal shift to rail. This will help rail to buck the economic trend, but the industry is aware that any growth in this climate is based on legislation rather than increased economic activity.

The Railway Industry Association says that clarity and certainty are essential. “We urge the Government to simply deliver what it says it is going to deliver”, said Caplan. “The industry still needs clarity on the details, including on all elements of HS2 and Northern Powerhouse Rail, and sight of the Rail Network Enhancements Pipeline, which still hasn’t been updated in over three years.”

However, reading through the Autumn Statement, the RIA expressed concern that capital budgets will seemingly not rise as planned after 2024. That may impact on the day to day running of the railway, and some commentators have expressed concern that the planned transition from Network Rail to the much wider ranging Great British Railways will be at least delayed if not abandoned. It has been noted that the competition for a headquarters, which has reached the shortlist stage, has yet to be announced, several moths after the public vote took place. RIA has pledged to monitor the former, to ensure that the rail renewals budget is maintained. They say they will work to protect today’s railway, and lobby the UK Government to commit to a long-term investment package beyond 2024.

As Industry and Commission, severely have “missed the train”, now UK and hemisphere, will have to pay.
Current “state of the art” railway infrastructure (according current mantra, at an “optimal maintenance”… standard!) no longer suststainable – basics, obviously is not worth investing, but just a temporary relief!
Now suggested is: Gates of Nation, the ports, the sustainable Advantage, shall be priority and awarded investments – simply now Goal for infrastructure – and railways… at UK!