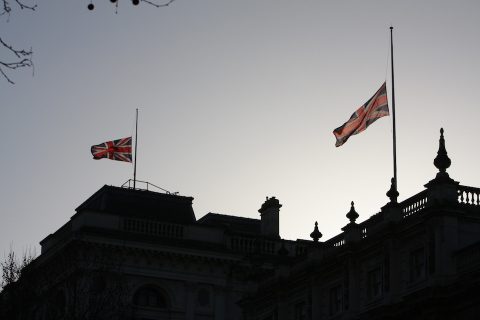 Published on 09-09-2022 at 10:45
The Union Flags at half mast at Hampton CourtForeign, Commonwealth & Development Office

Any hopes that the new transport secretary may herald a thaw in the ongoing round of industrial disputes on the British railways will have to wait. The new face at the Department for Transport, Anne-Marie Trevelyan, the member of parliament for Berwick-upon-Tweed, will find her induction shelved for over a week. Even though she has already taken up her desk at 33 Horseferry Road, the death of Queen Elizabeth, puts the UK very much on hold.

The new UK transport secretary is however no stranger to the cabinet office. Anne-Marie Trevelyan steps over from the post of Secretary of State for International Trade, which also carries the office of President of the Board of Trade, a long standing government committee. She was also a previous Secretary of State for International Development. Trevelyan has a few controversial moments in her career, but finds herself presented with a situation never faced by any of her predecessors.

Suspension of both state affairs and strike action

The new transport secretary has not previously had a high profile in the rail transport sector. She did however campaign for a significant upgrade of the main A1 London – Edinburgh road, which runs through her north east of England constituency. There were high hopes that Anne-Marie Trevelyan’s “to do” list would be topped by an urgent need to find a resolution for the ongoing series of major industrial disputes. The country’s rail network was only a week away from another round of strikes, which could have crippled freight and passenger services.

Given that the United Kingdom is now in a period of official mourning, following the death of Her Majesty Queen Elizabeth, there will be a suspension of the affairs of state, other than for the utmost matters of national emergency. Any other matters will also take a respectful pause too. Rail unions announced late on Thursday night (8 September) that action would be suspended. The period of mourning will likely last ten days, until Her Majesty’s funeral.

No rail minister yet appointed

As well as Grant Shapps, his deputy, the Rail Minister Wendy Morton, has also been moved on from her job. Prime minister Liz Truss has yet to appoint a successor. The likelihood is that the post will now remain unfilled until after the national mourning.

A week is a long time in politics and in one week, the new prime minister has cleared out the entire cabinet, staking her claim to be her own woman. She must surely have shared the nation’s shock that much greater change was only a matter of hours away.