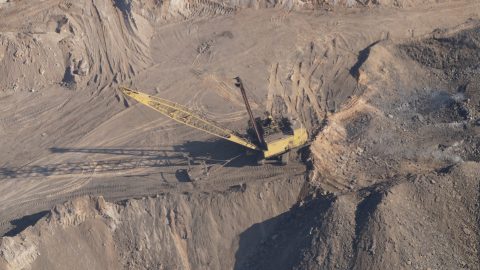 Ukrainian iron ore and steel suppliers face financial annihilation from supply chain disruptions. Major companies like ArcelorMittal or Metinvest Group see their exports and production output coming to a standstill since rail routes proved insufficient for transporting their products to the EU market.

Despite Ukrainian iron ore exports peaking in March following the import ban on respective Russian products, the growing trend did not live up to the expectations it built.

As the Ukrainian GMK Center, a think tank for the country’s mining and metals sector, reported, “Ukraine became the largest supplier of iron ore to the EU in March, replacing the supply of Russian products. Traditional Ukrainian monthly sales to the EU on the level of 1,4-1,5 million tons increased to 2,1-2,3 million tons, and the share of Ukrainian companies in the European market reached 30 per cent.”

However, the trend changed, and now steel and iron ore exports face a decline of 50 per cent compared to previous years, with companies even stopping production fully or partially.

A war can lead the business and industry sectors to dead ends anyhow. The situation in Ukraine posed challenges to the businesses residing there from day one. Nevertheless, most of the focus lies on Ukrainian agriculture production and how they can be transported out of the country effectively and timely. The problematic task of exporting Ukrainian grain by rail faced and still faces hurdles that sometimes might even look insurmountable.

The reason is simple since Ukraine is considered the breadbasket of Europe and other nearby regions. As a result, not exporting enough grain could result in a famine-apart from financially destroying Ukrainian farmers.

Yet, other industries struggle too in the war-torn country. Specifically, the mining and metal sector is dealing with unprecedented conditions when transporting iron ore and steel. “Transport problems have been discussed for a long time, but only in recent months have they fully manifested themselves and threatened grain exports,” said Andrii Tarasenko, chief analyst at GMK Center.

Nevertheless, iron ore exports suffer too. Tarasenko stressed in a GMK Center report that “in recent months Ukrainian iron ore export volumes to the EU reach 0,9-1,0 million tons, which is two times less than in March and 50 per cent less than traditionally exported volumes.” The fact that Ukrainian Railways also raised the freight tariffs by 70 per cent will probably worsen things, leaving production sites unable to transport their produce.

If we cannot export, why keep producing?

Steel companies based in Ukraine like ArcelorMittal, Zaporizhstal and Metinvest Group excessively reported that the current export situation forces them to work in a survival mode or even scale down production drastically. They all face issues with their supply chain since rail capacity is insufficient to meet their export demand.

Consequently, a couple of weeks ago, Metinvest Group “announced the suspension of operations at three of its iron ore plants due to congestion in the railway infrastructure, rising transportation costs, hike in energy prices and falling prices on the global markets.” Zaporizhstal also reduced its production by almost half due to logistical struggles, while ArcelorMittal reposted that the company struggles to survive, not explaining whether it will cut down production.

What will Europe do?

The disrupted supply chain between the EU and Ukraine highlighted the interconnectivity, harmonisation and capacity issues the European rail freight network needs to address. Now that the links are not there, transport problems will transform into significant economic struggles. “The decline in iron ore supplies from Ukraine means adapting supply chains for European companies, as it could be a long-term trend. We are talking about more than a million tons per month or about 10 per cent of the market,” explained Tarasenko.

He also wondered how Europe would substitute these volumes. Citing a report from Fitch, he said that the most probable solution for the EU would be to ramp up imports from Brazil, “where an annual increase in deliveries of around 10 million tons is expected.” But there goes green and efficient transport then. Metal products transported between Ukraine and the EU took approximately 8 to 14 days to reach their destination using rail freight or sea services.

Now, suppose such products are to be transported by Brazil. In that case, they will need approximately two months to reach Europe, impacting the environment with excessive emissions and the economy since starting prices keep fluctuating. That being said, if a product is not booked and transported in time, it could also lead to sharp price increases in Europe in terms of production and purchasing of the finalised products.