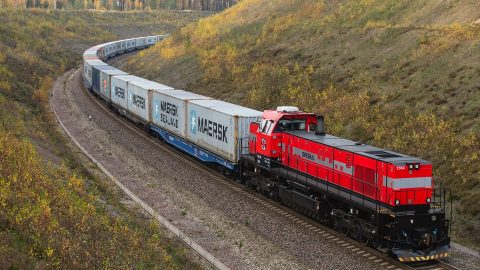 Estonian Operail involved in war logistics? ‘These are just assumptions’

State-owned Estonian company Operail has been the focal point of discussions lately. Operail is accused of continuing business with Russia despite the war and the imposed sanctions because of leasing wagons used in the war logistics. “These accusations are mostly just assumptions”, commented Operail’s CEO, Raul Toomsalu.

The discourse concerning Operail’s whereabouts commenced from the Estonian Public Broadcasting investigative show ‘Insight’. The show investigated Operail’s business with Russia, concluding that the company is leasing wagons used in Russian war logistics, impacting the company’s and country’s reputation. On top of that, it claimed that the leased wagons were purchased by Russia in the first place using taxpayer money.

The investigation’s focus had two aspects of concern. The fists and most clear one was whether Operail leased wagons are currently in Russia used for war logistics. The second one reaches back to 2017 and the wagon purchase process by the company. Back then, Operail invested 35 million euros in buying 1,000 wagons. The purpose was to lease them directly to boost its profits.

Those wagons were purchased by a Russian manufacturing company. Here come two points of criticism. First is that Operail purchased wagons from a Russian company, and second is that it used taxpayer money to proceed with the acquisition. “Even back in 2017 it was a bad idea to purchase equipment from Russia”, commented several guests of the show. Together with Operail, the Estonian Ministry of Economic Affairs and Communications is also accused of approving the transaction and further leasing of wagons without calculating the risks.

“No violation of sanctions”

Operail’s CEO, Raul Toomsalu, explained in a conversation with RailFreight.com that the accusations are mostly just assumptions. “Neither Operail nor The Estonian Ministry of Economic Affairs and Communications agreed to participate in this show, as both have several times denied any violation of sanctions. The accusations are mostly just assumptions”, he said.

He also explained the company’s perspective: “Operail transports goods in Finland and in Estonia. We do not transfer goods inside Russian Federation, and we do not cooperate with Russian Railways. It is correct that Estonia is and always was a transit country for East-West cargo flows. It is also correct that our subsidiary Operail Leasing rents wagons for different companies from the EU and Ukraine. However, it is absolutely false that wagons rented out to EU and Ukrainian companies serve in Russian war logistics. Instead, European private companies use these wagons to transport unsanctioned goods – mostly for Europe. Since the beginning of the war, we closely monitored the whereabouts of our rented wagons and all sanctions to act accordingly”, underlined Toomsalu.

As for the accusation that Russian wagons were purchased taxpayer money, Toomsalu clarifies that this is incorrect. “The wagons belong to the legal enterprise Operail Leasing, and the purchase was not publicly funded, so it is incorrect to claim that wagons belong to Estonian taxpayers or that taxpayers have invested 35 million euros in these wagons.”

Toomsalu also stressed that Operail’s leased wagons not only are not in Russia but are instead destined for export operations in Ukraine. “A large portion of our wagons are actually situated in Ukraine, and we are currently seeing into how these wagons can be used to help Ukraine in exporting their grains and metals to world markets”, said Operail’s CEO.

On top of that, he highlighted that the Estonian company is following strictly the sanctions imposed on Russia, resulting in immense volume losses. “In 2021, more than 80 per cent of the total volume of goods we transported were transit goods. As we strictly follow the sanctions, we closed all cargoes related to sanctioned persons. Due to that, we lost 80 per cent of cargo volume”, emphasised Toomsalu.

Nevertheless, Operail still tries to save the day. “We are working hard on our other projects. For example, our local multimodal freight transportation service is doing very well. We are also closer than ever to launching the Amber Train – a railway corridor between Lithuania and Estonia for freight transportation through the Baltic States. This would also help Ukraine in finding a new export corridor to global markets since Russia has blocked Ukrainian ports by the Black and Azov Seas”, concluded Operail’s CEO.