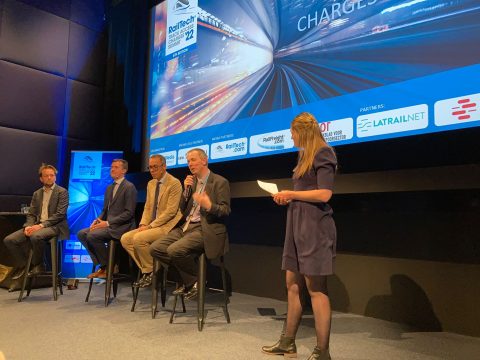 Continued pandemic support to reach 2030 goals, will that work?

Pandemic support for the railway industry in the form of adjusted track access charges could be a longer-term measure to support the modal shift to rail. The European Commission is currently looking into a more permanent measure that could help achieve the goal to run 30 per cent of all cargo on rails by the end of the decade.

This was discussed at the Track Access Charges Summit held this week in Rotterdam. Until 14 April 2022, EU member states were permitted to provide state aid in the form of track access charges (TAC) waivers or reductions. The measure was recently extended once more until 31 December 2023, although the negative impact of the pandemic on the performance of rail is more or less negligible.

But, more and more countries are beginning to see flexibility in charging as a way of supporting rail freight, Conor Feighan, Secretary General at the European Rail Freight Association (ERFA) explained. In his eyes, support for the rail freight industry is needed regardless of the pandemic. The current modal split of rail is 11 per cent, still a far way from the envisioned 30 per cent in 2030, and there are still many hurdles on the way.

Charges at an historic low

In the past two years, track access charges were waived or reduced in several countries, among them the Netherlands, Austria, Belgium, France, Italy, Luxembourg and Germany. In 2020, this resulted in the lowest total amount in TAC paid in five years, according to figures of the 10th Market Monitoring Report of the Independent Regulators Group (IRG), published this month.

For rail freight, TAC paid by railway undertakings went down by 27 per cent to 0.5 billion euros. For passenger traffic, this was a decline of 17 per cent to 2.8 billion euros, with the reduction in charges being the main reason, explained Robert Kogler from the IRG. However, less train activity was another reason. In 2020, 0.78 billion freight train-km were covered, the lowest value in five years, the IRG figures dictate.

Not the right solution

Whether lowering the track access charges is the right solution for the future is up for debate. Stefan Marschnig, assistant professor at the University of Graz believes that there are other, better alternatives. “Rail transport is not cheap, there are costs involved. Sure, you can eliminate markups that the market cannot bear, but not the direct costs, which are needed to provide good infrastructure”, he said.

Markups are additional costs related to certain variables, intended to incentivise a certain behaviour. For example, it could make transport on congested routes more expensive, and traffic on less consumed routes cheaper. However, markups can only be applied when the market can bear it. The direct costs are those costs incurred by the infrastructure manager for operating the network.

Much better, in his opinion, would be to provide ‘simply state aid’, or compensation schemes for certain market segments. “In Austria rail has a 30 per cent modal share. There are certain segments that receive subsidies, such as single wagon load traffic. TAC reductions are not going to get us to the 30 per cent or higher modal split in Europe, much more is needed to achieve these volumes”, he commented.

The risk with state aid, according to Feighan, is that it could easily end up with an incumbent, (company linked to a national holding firm), something that is not desirable as it would increase the dominant position the company already has. This was the case in Germany, where the government wanted to support DB Cargo, a form of state aid that was blocked by the European Commission.

“Supporting certain market segments could lead to similar situations, as single wagon load is often carried out by the incumbents for most of its part”, he added. “During the pandemic, support via track access charges was the best available option. But for the longer term, this measure will need to be investigated much further.”

Not just about the money

There are other elements that are not favourable for the longer-term support package, notes Dominik Huebler, economic consultant at NERA Consulting. “For example the fact that under the current directive, waivers are paid out retroactively. This results in the situation where railway undertakings are receiving money for the operations they are carrying out. Instead, we need to look at how we can incentivise more traffic on the rails.”

“We should not forget about the bigger picture”, agrees Robert Kogler from IRG Rail. “This bigger picture is that other sectors do receive considerable support, while we want to have more cargo on the rails, away from the road. We somehow need to tilt that balance, with any kind of support.”