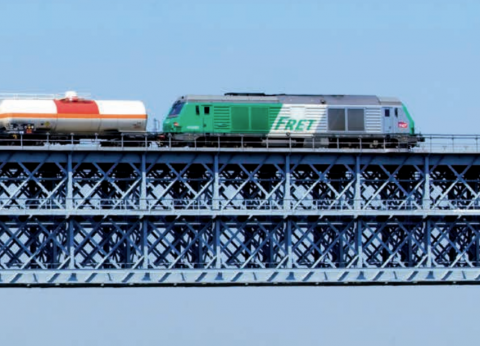 SNCF back in the black: who would have thought?

The loss-making rail freight subsidiary SNCF Fret was in the black for the first time last year. This was announced during a recent press conference where the French state railways SNCF presented its annual results.

Rail Logistics Europe (RLE) posted an increase in revenue of 9 per cent to almost 1.6 billion euros and an EBITDA of 226 million euros, while its main component, Fret SNCF, was in the black for the first time. SNCF Chairman and CEO, Jean-Pierre Farandou, hailed the turnaround last year in the financial performance of the group’s rail freight division.

SNCF Chairman and CEO, Jean-Pierre Farandou, hailed the turnaround last year in the financial performance of the group’s rail freight division: “Who’d have believed it? All of the people I’d spoken to were saying that it’ll never happen. It’s a ‘mission impossible.’ There was pessimism all round but we’ve done it and it’s extremely pleasing. We’ve demonstrated the viability of rail freight which also adds weight to moves towards more sustainable goods transport in France and in Europe with a shift from truck to train.”

SNCF’s director of Financial Strategy, Laurent Trevisani, said Fret SNCF’s significantly-improved showing was due to an internal performance plan, pursued over a number of years, paying off while a contributing factor had been French state aid to the rail freight sector as a whole, not just to Fret SNCF, which has targeted single wagons and combined transport.

“Resilient” activity at Fret SNCF last year saw revenue rise 6 per cent with a “vigorous recovery” in steel products, chemicals and petroleum traffic. Another RLE unit, Captrain, also recorded a solid recovery in activity (+8 per cent) despite the difficulties in the automotive vertical and poor weather in February and July last year.

SNCF’s Forwarding arm, Forwardis, recorded “further progression” in its activity, particularly due to the development of traffic from and to China. This followed a very good 2020. RLE’s Combicargo unit posted a 24 per cent increase in revenue in 2021 versus the previous year, its Navitrucking product having led to a strong modal shift.

It was more of a mixed picture at the division’s rail ‘motorway’ unit, VIIA, which saw some routes perform better than others, notably the Bettembourg (Luxembourg)-Boulou (Perpignan) connection, operated by Lorry Rail, which set new records for traffic.

Freight forwarding was the strongest driver amid favorable price trends and rising volumes. Contract logistics also did well, buoyed by e-commerce and strong demand in the United States and in Europe.

Recurring net profit was a negative 185 million euros but with 1.1 billion euros in non-recurring income from the sale of subsidiary Ermewa. This company specialises in leasing services for industrial railcars, tank containers and locomotives, as part of a Group strategy to sell non-core assets, and its net profit stood at 890 million euros.