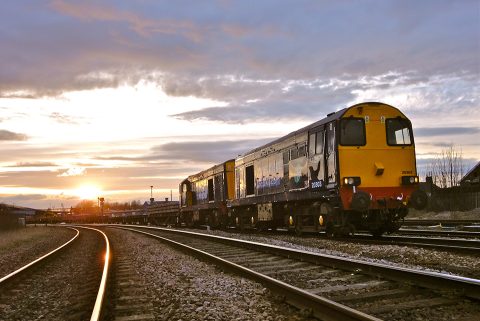 Direct Rail Services, the rail freight arm of Nuclear Transport Solutions, sells its collection of heritage locomotives and carriages as it modernises its operational fleet. The Carlisle-based operator has a notably diverse range of motive power under its roof and is seeking to reposition its fleet as one of the most modern in Europe. The sale is expected to be completed by mid-November.

The announcement that DRS is modernising its fleet has been keenly anticipated throughout the railway industry community. The DRS fleet sale will see some of the oldest operational locomotives on the British network come to the market. Some of the marques on the manifest have a heritage that can be traced all the way back to the modernisation programme of British Railways, which began in the 1950s. DRS say this is just the first wave of a programme of sales, expected to be completed in the coming year.

This auction sale will see Direct Rail Services part company with the first locomotives put into service. DRS say that all the historic class 20 locomotives, which have been with the company for over 25 years, will be sold. The modestly powered units are now often used in pairs to cope with modern loads. They were used on the company’s nuclear flask trains, where ‘top and tail’ working greatly improved the required reliability for this most sensitive of cargo movements.

Also under the hammer will be a selection of their Class 37 locomotives – a marque that, in the eyes of operators, has improved with age and is used on everything from relief passenger workings to Network Rail maintenance trains. Interest is expected to be high in the Class 57 locomotives in the sale. The units are, arguably, the most desirable on the sale list. They are a remanufactured development of the once ubiquitous Class 47, one of the genuine success stories of the modernisation programme. Possibly the most interesting sale items will be among the rolling stock on offer. The ground-breaking Mark 2 coaches, developed in the 1970s and 1980s, revolutionised passenger accommodation in the later years of British Railways and set the standard for modern rail travel in the UK. Examples of the coaches have been exported and sold second-hand to operators around the world.

Nostalgia but times move on

According to Chris Connelly, NTS Deputy CEO and Rail Director, the prime motivation behind this divestment of prime movers have been environmental. “This is an important first step for DRS as we look at our fleet and our plans for the future”, he said. Connelly, however, was not above a note of nostalgia. “The Class 20s are really special engine to us, having been with us from the start, but things move on, and a modern, dynamic rail freight operator needs a modern fleet to match our ambitions.” DRS recently rebranded as part of Nuclear Transport Solutions, which echoes the company’s heritage as a specialist operator.

Connelly set out the market for the coming year by noticing that DRS has a planned programme of sales. “This is the first phase”, he said. “There will be more Class 37s and some 57s offered in the future as we move towards our net carbon zero ambitions.” The catalogue of sale also includes a selection of Class 20, Class 57 and MK2 coach parts available to purchase. Bidders will need to register, and DRS has released reference 13740 to download the tender documents. This first sale runs until midday on Thursday 11 November.

So why are DBC cargo allowed to leave their not in use “modern” Class 60 Locomotives out in the open air to rot away in all weathers? To stop competitors getting hold of them ? They should be reported under unfair competition rules !!