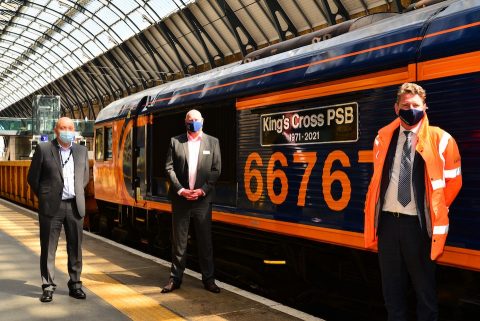 London King’s Cross Power Signal Box, the epitome of the modernisation of the British railway scene in the 1970s, has passed into history. The closure of the signalling control box has been commemorated by the main rail freight contractor on the vast overhaul of the terminus, GB Railfreight. The operator has formally named one of its workhorse class 66 diesel locomotives in a ceremony at the station.

GB Railfreight (GBRf) has commemorated the final closure of the London King’s Cross power signal box by naming Class 66 locomotive 66767 at the station on 23 April. The GBRf team has provided engineering trains and supported a project to renew the signalling system and overhead line equipment in the area and simplify the track layout. The nameplate, “King’s Cross PSB 1971-2021”, carries the traditional spelling of the station, complete with an apostrophe.

As a result of extensive upgrading at the East Coast Main Line terminus, the King’s Cross Power Signal Box has been closed, and signalling control has been relocated to the state-of-the-art Rail Operating Centre in York. The switchover represents the most significant move, so far, in a vast programme to modernise train control across the whole UK and bring oversight of the network into the hands of a few high-tech centres. The programme is aligned with the European ERTMS project as part of the drive towards a digitally controlled railway. Eventually, that will mean the demise of the traditional lineside signal box and even purpose-built centres such as King’s Cross PSB. GBRf decided to mark the occasion by renaming the last train, which was signalled into the station by the box in its honour.

The King’s Cross Power Signal Box opened in September 1971, after the original signal box built by the London and North Eastern Railway (LNER) in 1932 was closed. All signalling operations moved overnight to the new Kings Cross Power Signal Box situated on the old York Road Station buildings site. The original LNER signal-box remained in-situ for another five years before being demolished as part of the electrification scheme and rationalisation of the station track-work. The new locomotive was named ‘King’s Cross PSB 1971-2021’ to mark what the industry has called “this historic day”.

Commemorated by GBRf and industry at large

“After 50 years, King’s Cross PSB closed its doors with 66767 being the last loco signalled by the box into King’s Cross station. Quite an honour when you consider all the other famous trains that have come and gone from the place”, said John Smith, the managing director at GB Railfreight. “I’d like to thank all those who worked on this project, especially our colleagues at Network Rail, with who we worked so closely during these last few months.”

The resignalling and remodelling of King’s Cross has been one of the highest-profile contracts for the entire rail freight sector in the UK. The station is most famous as the iconic “Flying Scotsman” passenger express departure point, which traditionally departed for Edinburgh daily at 1000.