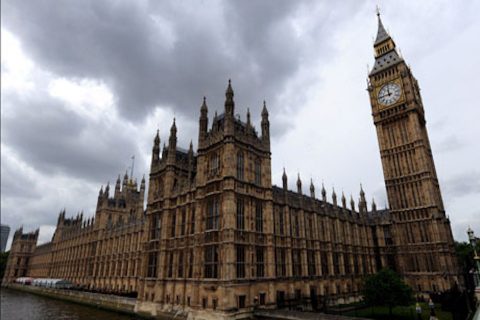 The House of Lords, the upper house of the UK parliament, has raised questions about the future of electrification on the British network. Speaking earlier this week in the Chamber, Lord Richard Faulkner of Worcester, often referred to as ‘the railway peer’ brought forward questions prompted by the Railway Industry Association’s (RIA) recent ‘Why Rail Electrification?’ Report. The document, published in April, specifically addresses the question of future motive power for the rail freight sector, in the light of government mandated targets to reach net-zero carbon across the entire economy by 2050.

Lord Faulkner’s intervention on electrification, questioning his fellow peers in the upper House of the UK parliament, comes at the same time as the RIA ramps up its own “RailDecarb21” campaign. The body which represents the entire rail supply chain in the UK, is lobbying for an immediate start on electrification, as well as fleet orders of hydrogen and battery rolling stock, which it says would help the UK government’s own “build back better” pledge. The RIA also wants to see immediate action to help the rail freight industry overcome the technical and logistical challenges of switching out of its large fleet of diesel motive power.

Questions were put to the House of Lords Transport Minister, Baroness Charlotte Vere, about the Railway Industry Association report. Lord Faulkner sought clarification and commitment from the government to support the industry in the race to decarbonise. In response, Baroness Vere said that the RIA report was taken in good faith. “The government welcomes this report and agrees that further electrification is required to decarbonise the railway alongside the deployment of battery and hydrogen trains on some lines”, she said. “The best way to make most effective use of the supply chain is a rolling programme.”

The House of Lords is the senior chamber of the two-house British parliamentary process. Although less widely covered in the media, its appointed representatives have executive powers over the elected “Commons”. The Lords is where the Queen reads the annual document of business for the government, usually referred to as The Queen’s Speech. Her Majesty made that formal speech earlier this month, commanding the UK government to publish its long delayed review of the railway industry – the Williams Review.

“The Queen’s Speech confirmed the long-awaited Williams Review White Paper on rail reform will be published shortly”, said Darren Caplan, chief executive of the Railway Industry Association. “Encouragingly, that investing in and improving national infrastructure to transform connectivity – and creating new jobs and skills to drive growth in sectors such as rail – is seen by the Government as key to strengthening economic ties across the UK.”

Specifically raised in the Speech, the High Speed 2 (HS2) project was cited as critical to the economic recovery of the UK, not least for releasing capacity on the West Coast Main Line, the busiest mixed-use railway in Europe. However, it was noted that the Queen’s Speech omitted any reference to the proposed eastern leg of the scheme, which would extend the high speed network beyond the London – Birmingham – Manchester axis, and on to Leeds in the north of England. That phase is seen as crucial to releasing step-change capacity for freight across the north of England and ports on both the west and east coasts. “We urge the Government to clarify whether the eastern leg will be included in forthcoming legislation, with the publication of the Integrated Rail Plan for the Midlands and North a priority”, added Caplan.

Back in the House of Lords, Richard Faulkner, the railway peer may well have more probing questions for his fellow parliamentarians.