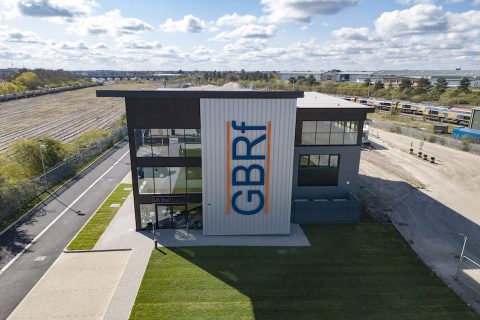 Operator GB Railfreight (GBRf) has officially opened their new offices in Peterborough, about one hour north of London on the East Coast Main Line. The 22-year-old company remains registered in the capital, but has commissioned this new headquarters within the heart of its operational base in the town.

The award-winning New England House design will see much of the corporate function housed in the same building as operations, including the company’s innovative simulator unit, which helps train future freight drivers offline. The works on the building were led by locally-based engineers Lindum, who finished on time and within budget, despite disruption from both Brexit and the COVID-19 pandemic. The building will house central functions, training and the operations departments, as well as the fleet management requirment, and the GBRf 24-hour control centre.

Green light for training and environment

The new office is based next door to the company’s state-of-the-art simulators. GBRf has ambitions to become the leading training provider for train drivers and managers across the rail sector. There is an acknowledged shortage in both disciplines in the UK industry. The new offices, say GBRf, will host new classrooms for prospective train managers together with the simulators.

The building will have viable green credentials, with solar panels having been installed on the roof and a number of electric vehicle charging points and bike racks having been installed. While the tracks around the centre are not yet electrified, the ‘wiring’ of the East Coast Main Line (ECML), which adjoins the centre, was among the biggest single projects undertaken by the nationalised British Railways over a fifteen year period to 1991. Like all operators, and industry at large, the company has a requirement to reduce carbon emissions in line with the tough UK government targets.

The engineering company Lindum, based very close to the Peterborough site, were instrumental in the regeneration of the brownfield site. They were wholeheartedly praised by the GBRf management team for reaching targets despite unforeseen obstacles to their work. Darren King, the managing director of Lindum was particularly happy to see the site being regenerated. “Work began just before the Covid outbreak so we had to introduce strict hygiene rules and extra safety measures on site to ensure the impact of the virus was kept to a minimum.”

While Peterborough, less than 160km from London, does not represent the northern heartlands addressed in the UK government’s “Levelling Up” agenda, it is a commitment to decentralising for GB Railfreight. Much of the industry is headquartered along the ECML, and the new offices bring the company closer to many potential clients. “It is great to see a company like GB Railfreight reaffirming its commitment to Peterborough”, added Darren King. “We’ve enjoyed working with such a forward-thinking and ambitious client.”

GB Railfreight is currently the third largest rail freight operator in the United Kingdom, with their own turnover expectations posted to exceed £225 million in 2021.