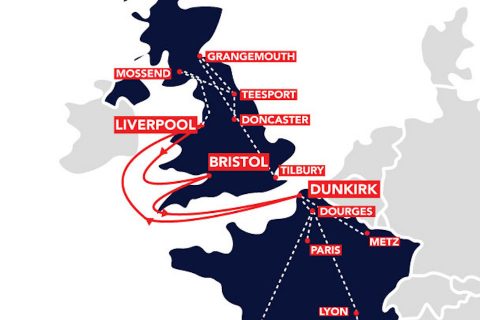 The effects of Brexit are being felt on the ground, and also on the high seas. Whatever political sources may say, logistics operators and freight forwarders are voting with their vessels, and putting increased capacity into routes away from the Channel Ports, and away from the UK altogether. Trade between the UK and the EU has not stopped, but with reluctance among freight operators to risk delays, many loads are being redirected to less congested parts of Great Britain. That has positive implications for rail freight, as port operators look for ways to handle greater volumes as economically as possible.

With increased demand for facilities at ports in the UK away from the Channel, and for sailings direct to Ireland, there are opportunities for rail freight operators to handle more traffic, particularly displaced intermodal flows, and move those loads on to inland distribution hubs. That could be good news for UK ports with rail facilities already in place, and may also spark a revival in Irish intermodal traffic. With what the logistics sector commonly call the GB Landbridge proving an increasing bureaucratic route, freight forwarders have jumped oil board with alternatives offered by shipping companies.

One familiar short sea specialist has already taken advantage of expanding facilities at the Port of Liverpool, and available capacity at Bristol Docks. Containerships, part of the worldwide CMA CGM shipping and logistics company, has just added to their scheduled sailings with a route between the three ports. Carrying the shorthand name ‘DUNK’ the service sails on a weekly round trip between France and England. Rail forwarding is part of the company’s forward thinking.

Containerships already has a relationship with the rail industry in the UK, running its own service between the North East of England and Central Scotland, serving clients and operational requirements. “We are always looking at ways to place as much as we can on the rail network and once the DUNK service is more established we expect that there should be opportunities moving cargo up to Scotland and into the Midlands”, says Jonathan Paine, the Chief Land Officer for the company.

While modern Liverpool is set up for intermodal traffic, Bristol has historically had a degree of bulk flows, reflecting the industrial profile of the area served. However, at another predominantly bulk port, Teesport, Containerships already successfully operates their own intermodal service, between there and Mossend, near Glasgow. “The Scottish Express service was set up to cater for the demands of some of our key clients”, says Paine. “This improves our operational efficiency and reduces our carbon footprint by switching to rail. The Scottish Express service is a directly contracted service that we have with PD Ports at Teesport whose partner is GB Railfreight.”

Willingness to work with the rail freight sector, is leading the way for Containerships. The group already has an extensive network of directly operated and contracted rail services on mainland Europe. As for the rest of the maritime industry, operators are ready to set sail in pursuit. Among them, Brittany Ferries has reported increased unaccompanied shipments in its Western Channel routes between France and Spain and the Irish ports of Cork and Rosslare Europort. DFDS has also introduced a larger vessel on their route, from Dunkirk to Rosslare Europort, in south east Ireland. Although mainly road served, Rosslare retains a rail connection, and has considerable potential for rail freight expansion.

That potential cannot have escaped the port operators, who just happen to be the Irish railway operators, Iarnród Éireann. That could renew calls for rail freight expansion in the rest of Ireland. The Brexit dividend may be felt on the west coast of England, but most keenly on the south coast of Ireland. The technicalities of coordinating Maritime and rail freight operations is an interest for many delegates at RailTech Europe 2021 Live at the end of this month. Registration is now open.