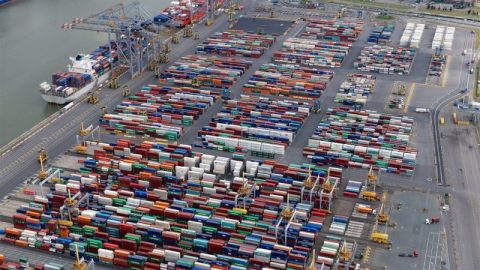 After about one and a half years of negotiations, the two Belgian ports announced that they reached an agreement to merge their port companies. Antwerp will have an 80,2 per cent interest while Bruges a 19,8 per cent.

Whereas Rotterdam’s container transhipment suffered considerably in the past year due to the corona crisis, Antwerp managed to record a slight growth in TEUs to just over twelve million. At the same time, its numbers in tonnes remained the same at 139 million. In Zeebrugge, the transhipment volumes increased by more than ten per cent to 1,8 million TEUs and eighteen million tonnes.

Based on the figures for the first three quarters, the difference between Rotterdam and Antwerp probably narrowed last year to somewhere between 650,000 and 800,000 TEUs. After nine months, the Dutch port stood at a minus of 4,7 per cent in TEU terms.

Because of the peak traffic in the last quarter, the final figure for 2020 will probably be a little more favourable for Rotterdam. Nevertheless, it seems inevitable that it will remain well below the 14,8 million TEUs of 2019. The Port of Rotterdam Authority will present its final annual figures on Friday 19 February.

Antwerp Port Authority published its handling figures for the past year a month ago. Top executive Jacques Vandermeiren was already speaking out loud about a top European position for the Belgian port. That seemed a bit premature at the time, but as the future leading man of Port of Antwerp-Bruges, he probably already counted the Zeebrugge tons and TEUs in his mind.