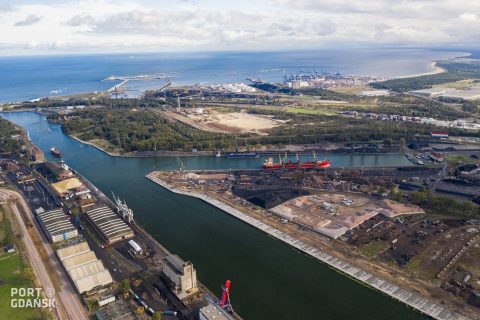 The Port of Gdansk is about to complete the previously initiated 1.3 billion euros expansion programme in the course of this year, despite the corona pandemic. The entire investment that includes 40 different sub-projects is the largest that the port has ever seen. According to Łukasz Greinke, President of the Port of Gdansk, the aim is to reach transhipment volumes of 60 million tonnes per year in the next five years.

Last year, the port handled 48.5 million tonnes of cargo, despite the difficult conditions 2020 created. This number secured its position in the top twenty European ports officially. In general, the port aims to become a hub for Central and Eastern Europe. With such steady improvements taking place and growing numbers, one would say that the goals set are entirely feasible and potent to become a reality.

This year, an important step will be the completion of a 163 million euros programme to expand and modernise the road and rail network in the outer port. Works include the construction of over seven kilometres of roads and ten kilometres of new railway lines and a large truck parking area. This should lead to better access to, among others, the Deepwater Container Terminal (DCT) Gdansk.

Additionally, some 125 million euro will be invested in modernising the channel, extending quays and improving navigation conditions in the inner port. In total, modernisation processes will include five kilometres of quays, while seven kilometres of the waterway will get deepened and widened. The port is also planning to build a floating storage regasification unit (FSRU), where the fuel will convert from liquid to gas. For this project, Gdansk cooperates with the Polish gas pipeline operator Gas System and the national maritime authority.

As Greinke added, the coordination of investments undertakes “a group of public and private organisations, including the Port of Gdansk, the Maritime Office Gdynia, a Government agency managing the Gulf of Gdansk, PKP Polskie Linie Kolejowe the Polish railway infrastructure manager, and businesses based in the port”. Moreover, he admitted a passionate, shared vision to transform Gdansk into the Baltic sea’s main gateway.

Regarding the ‘Baltic gateway’ objective, the Port of Gdansk seems to be working intensively towards this direction with important initiatives. For instance, the latest concerned the establishment of a ‘Black Sea to Baltic’ intermodal corridor that aims to work as an alternative to westwards transport from China. With such a development, Gdansk will strengthen its position even more and gain valuable points to become the Baltic Sea’s sovereign port.

Nevertheless, Gdansk showcases a steady growth and some times record-breaking growth. For instance, in 2019, it was among the most dynamic European container ports together with Piraeus. The fact that it is always between the top twenty European ports in the latest years also indicates its tendency to improve its services and capacities.

It is critical, especially in uncertain times, to see such investments taking place and complete successfully. European transportation undoubtedly needs robust and competitive ports that include intermodal terminals and facilities that support rail and help it grow its services.