The rail freight sector is fighting to maintain its profitability despite terrible trading conditions. The headlines from the latest official UK rail statistics make mixed reading. The government figures show a summer of disruption and declining tonnage, with the main culprit being the continuing pandemic. The Office of Rail and Road statistics for the summer reveal a ravaged economy, and the rail freight sector has not been immune.

While there has been excellent punctuality and reliability, there has also been a decline in the rail freight sector. The latest data set covering freight performance on the UK rail network has just been published, reviewing the summer quarter and the height of the coronavirus pandemic. The Office of Rail and Road (ORR), the official government source for monitoring performance across the sector, has collaborated with infrastructure management and freight operators to compile its quarterly review of the industry and has just published analysis for the period July to September 2020.

In a statement backed by the ORR, freight rail usage and performance during the second quarter of 2020- 21 was affected by the coronavirus (Covid-19) pandemic. They say the lower number of passenger and freight train services in operation led to improvements in performance, but freight volumes declined. In fact, total freight moved was 3.89 billion net tonne kilometres in 2020-21 Q2, representing the lowest Q2 total since the time series began in 1998-99. This in part can be attributed to the changed nature of materials and cargo carried, and the overall decline in UK heavy industry. The almost total closure of the coal industry will continue to be a statistical legacy, but the over riding current factor is the pandemic. 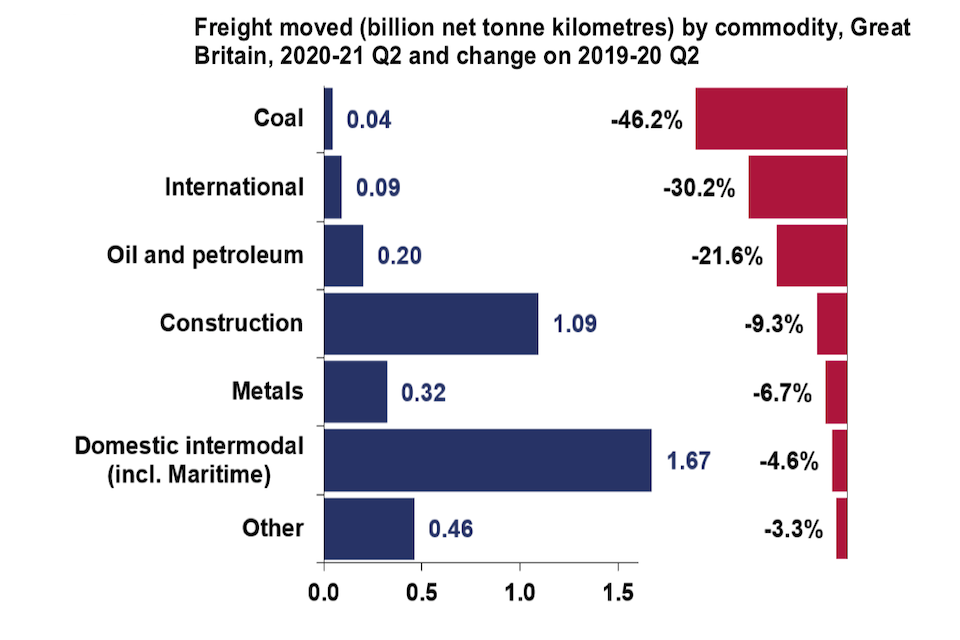 Despite the obvious contribution made by rail freight to moving essential supplies around the country, a surprise in the figures is a lack of growth in the intermodal sector. “Domestic intermodal – transporting of goods to and from GB ports makes up the majority of this category – has the largest share of freight moved – 43 per cent”, say the ORR. That figure and trend will come as expected to the industry, but the figures reflect a surprise fall in boxes carried. “It has decreased by 0.08 billion net tonne kilometres compared to the same quarter last year”, report the ORR.

It is highly likely that, while moving UK-originated supplies around the country has been significantly increased, that vital workload has been offset by the decline in international trade. The widely-reported disruption to the international supply chain, which has seen shipping containers lingering at the quaysides around the UK, is undoubtedly a contributor.

In terms of absolute volumes, the construction sector has seen the largest decrease, falling by 0.11 billion net tonne kilometres compared to the same quarter last year. The market share of construction has remained the same at 28%. What may surprise most

Punctuality and the passenger effect

Punctuality and reliability has never been better – at least in statistical terms. “The Freight Delivery Metric was 95.4% in 2020-21 Q2. This was the highest level of Q2 freight punctuality since the start of the time series in 2012-13”, says the ORR. “With passenger operators running a reduced timetable compared to before the coronavirus pandemic, freight services were prioritised.”

Freight may not be ruling the rails as much as earlier in the year. Last week the ORR published analysis on passenger usage, which has shown a significant revival. Rail passenger journeys in Great Britain increased by almost 100 million in July, August and September (Q2 2020/21) compared to the first quarter of the year as the first lockdown eased. 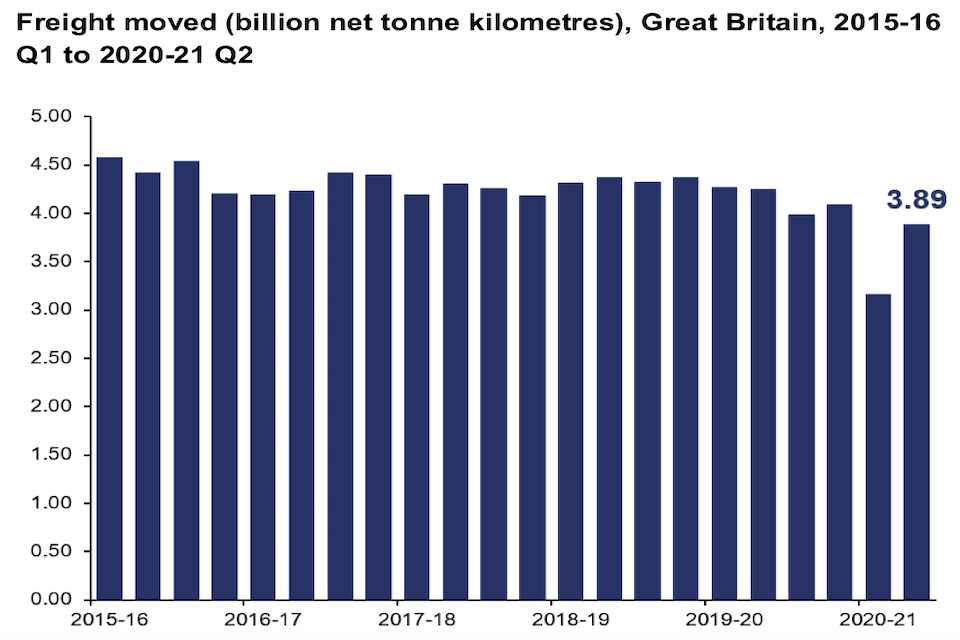 The ORR passenger figures revealed that 134 million journeys were made in the second quarter of the year. There is much speculation about long-term passenger revival, and how patterns of usage may change permanently. How this may affect freight operations is still a matter of much debate. “The Department for Transport estimated that relative passenger rail usage began the quarter at around 16 per cent and then increased throughout the summer”, says the ORR, comparing year on year figures. “The highest percentage of rail use – 43 per cent – estimated by the DfT was recorded for the first week of September.”

Although numbers were less than a third of usual, this was an increase in Great Britain from 35 million passenger journeys in Q1– the lowest level of usage since the mid-nineteenth century.

Figures are complied in collaboration with the infrastructure manager Network Rail, and all the largest freight operators. The ORR makes no speculation as to future performance, but the outlook is improving. Vaccination of the British population has started, and the prospect of more relaxed trading conditions is on the horizon. However, there is a long way to go and it is no speculation that the next few quarterly reports will still make uncomfortable reading.