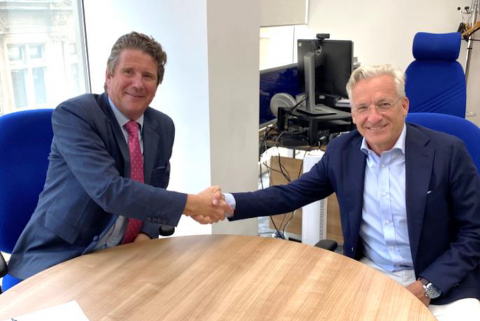 Lucerne-based Wascosa secured a major wagon leasing contract with Network Rail. The Swiss leasing company will supply 570 wagons to the UK infrastructure management agency. The order will be fulfilled by Greenbrier Europe, who have five manufacturing plants spread across Poland, Romania and Turkey. A ten-year maintenance deal has been agreed with GB Railfreight.

Family-owned Wascosa is set to become a more familiar name on the UK rail freight scene with the signing of this leasing deal, which represents the culmination of a two-year negotiation with Network Rail. While the fleet of 570 wagons will see infrastructure trains renewed, it does also highlight the lack of large-scale freight manufacturing in the UK. All the major traditional factories have long since closed, and freight rolling stock building is limited to independent producers.

Modular wagon designs for the future

Network Rail will however see a new fleet of modern modular wagons taking on the extensive roll of track maintenance and network development. “For Wascosa, this achievement is recognition of our determination to develop efficient and innovative solutions for wagon users”, said a very happy Wascosa chairman and owner, Philipp Müller. He is pleased now that his company in embedded with Network Rail supply chain operations.“We are delighted to have been selected to serve Network Rail’s wagon needs and look forward to working closely with Network Rail’s SCO team and our partners to deliver a first class service over the coming years”, he added.

Part of the order consists of traditional designs, including the company’s “Falcon” box wagons and JNA Big Box wagons for bulk ballast loads. Of more interest, Wascosa will be leasing their ‘flex-freight’ modular designs to Network Rail. It was only last month that the company celebrated commissioning of the 500th example of the award-winning rolling stock. Their statement says the wagons are suitable for the carriage of track panels, sleepers, switches, rails and loose materials, made possible by a range of superstructures which can be mounted on a fleet of 60-foot container flats. “This ground-breaking solution for Network Rail confirms Wascosa as the leading provider of freight wagon systems in Europe and positions the company perfectly for future growth in the UK”, they say.

This is not the first major UK rolling stock contract to go abroad this year. In August, Transport for London, which operates metro services in and around the UK capital, started to take delivery of a substantial order for over seventy wagons provided by Chinese state-owned manufacturers CRRC. Volume freight manufacturing is no longer possible in the UK, with the large works in places like Birmingham, Swindon and Doncaster all having ceased production. Notable exceptions include WH Davis, in the heart of England, which owns the last independent manufacturer in the country and undertakes bespoke work.

Network Rail was criticised only last week for sending other work abroad, in a case where, unlike volume rolling stock manufacture, industrial capacity still exists in the UK. Trades unions rallied around the case of a specialist foundry near Edinburgh, which is now in jeopardy as a result of losing long-standing infrastructure work. Present day UK manufacturing tends to be centred on the assembly of passenger multiple units, but there are growing concerns within the industry that supply chain capability is being eroded.

However, the partners in the Network Rail deal are upbeat about their parts in the future of the industry. Speaking last month to RailFreight.com, Irmhild Saabel, who is head of business development at Wascosa, said that a decade after the first of their flex freight system rolled out onto the tracks, modular freight wagons are today firmly established in the market. “In the future, they will account for a substantial share of new purchases made to replace old rolling stock. This will be the case for standard freight wagons, but also for specialist freight wagons”, she said.

John Smith, the managing director of GB Railfreight, is optimistic that the deal, and his company’s part in it, will in fact be beneficial to the UK rail industry. “Being able to bring the industry together to offer an efficient flexible wagon solution to Network Rail is crucial to be able to deal with supply chain demands for the future”, he said. “Equally as important is modernisation of infrastructure wagons that will last for many years. GB Railfreight are delighted to have partnered with Wascosa to be able to offer innovative superstructures and efficient wagon maintenance to Network Rail that achieves both modernisation and future wagon supply chain demands.”

In our main picture above, John Smith, GB Railfreight, and Philipp Müller, Wascosa, shake hands on the deal. Meanwhile, as redevelopment continues, in places like Birmingham, Swindon and Doncaster, rail connections are vital to the future economy of the UK. New tracks for new purposes will undoubtedly be required and, in future, those tracks may well be delivered on the backs of modular wagons leased from Wascosa.