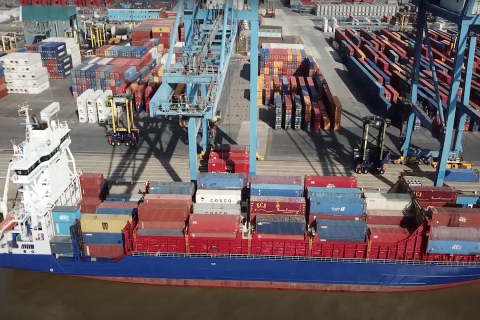 The huge high-speed rail project in the UK, the London and Birmingham HS2 line, will enable growth in rail freight usage at UK ports. This is according to a new promotion by the rail developers, aimed at winning over operators around the UK. A slick video presentation, shot on location at Tilbury’s intermodal container terminal, emphasises the capacity enhancements the new line will bring, all across the network.

The choice of Tilbury as the location for the shoot is not by accident. The London port is part of the portfolio of Edinburgh headquartered Forth Ports Group, and traffic flows from here, both in boxes and in bulk, to terminals all over the UK, making use of the busy East and West Coast Main Lines, the routes set to benefit most from the HS2 project.

With big expansion plans in hand for Tilbury, the owners are well aware of the need for more rail capacity to take advantage of their extensive facilities. Forth Ports Group, who operate Tilbury, anticipate moving an additional 900,000 tonnes per annum by rail within the next five years. “HS2 will give us the headroom to grow our network of low carbon delivery routes”, said Carole Cran, the chief financial officer at Forth Ports. “By building a new rail line, HS2 takes fast trains off the existing railway and places them on their own dedicated tracks. This allows local and freight trains to run at similar speeds on the existing lines, freeing up space across the network for many more passenger and freight services, so there are benefits for everyone, not just those who will travel on HS2.”

Tilbury dispatches loads all over the UK, including as far as Grangemouth in Scotland, Forth Ports intermodal terminal on what might be called their home river. With Tilbury2, a major expansion project underway, Forth Ports have entered into a collaboration with DP World, the owners of downstream neighbours London Gateway, to jointly bid for freeport status across the two large Essex ports. The Westminster government recently invited bids for up to ten freeports across the UK.

An accompanying video graphic from HS2 goes to some lengths to explain in lay terms the advantages of taking the high-speed traffic off the major north-south arteries, and the operational benefits of running trains at broadly uniform speed and therefore closer together, to significantly enhance capacity.

That capacity will feed into the Tilbury2 project, which will boost capacity to over 500,000 containers annually. To better serve the construction industry around London and the South East, which is already dependant on rail for four out of every ten loads, Tilbury2 will have a dedicated construction material and aggregates terminal (CMAT), capable of handling in excess of five million tonnes of bulk product per annum.

Tilbury in critical role for the nation

HS2 is keen to demonstrate how the line will indirectly take many lorry journeys off the UK roads, while growing the economy. The company says giving UK ports the ability to transport more goods using rail will take lorries of the roads, reducing carbon emissions from transport.

The local politician, Jackie Doyle-Price, the member of parliament for Thurrock, the constituency that includes Tilbury and is ‘next door’ to London Gateway, said HS2 would bring benefits to the whole UK, including her constituency. “HS2 will free up capacity on existing lines to enable the transport of more rail freight including from major ports like Tilbury in my constituency”, she said. “I fully endorse Tilbury’s push to grow its low carbon delivery model, with rail at its heart. Whether it’s food, medical supplies, or building materials, as we build back better, Tilbury will continue to play its critical role for the nation.”