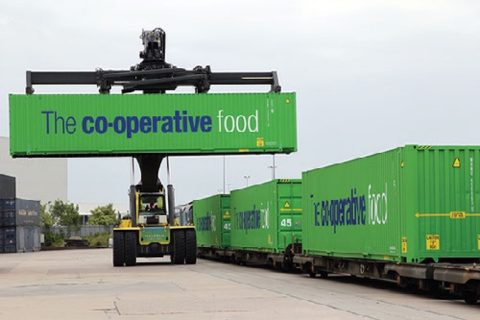 Published on 28-09-2020 at 06:30
The Co-Operative Group expand their use of rail transport with six new containers at DIRFT Railport near Daventry, Northamptonshire

Despite the praise rightly heaped on rail freight operators for keeping the essential supplies flowing, the April-July statistics make grim reading for the sector. Official figures from the Office of Rail and Road, released late on Friday, have given business development managers a sleepless weekend as they face a black Monday of falls in almost every index.

Coronavirus is the obvious influence in the depressed rail freight figures issued over the weekend by the Office of Rail and Road, the non-ministerial regulator for surface transport matters. However, an exceptional number of weather-related infrastructure issues cannot have helped either. Nevertheless, amid all the gloom over depressed load statistics, freight reliability reached an all-time high of 97.3 per cent, as measured by on-time arrivals.

Freight figures have been compiled by the ORR since 1998, and never have they reflected such a dark image. The headline total freight moved was 3.16 billion net tonne kilometres in the first quarter of 2020-21, the lowest quarterly total on record. That represents a 26 per cent reduction on the same quarter last year.

The decline in heavy-weight coal traffic has now worked its way though the statistics, so that anomaly can be discounted. This quarterly fall can be called a direct consequence of the coronavirus pandemic, and the wider economic disruption resulting.

All sectors under fire

Despite seeing heavier than normal intermodal flows on supplies for food, household and medical goods, there were worrying falls in that sector, along with all the others. While Anglo-Scottish supermarket trains were, in some instances, double-headed to cope with the weight of loadings, intermodal flows serving manufacturing industry and overseas trade almost ground to a halt in March and April. Consequently, international traffic was depressed by 40 per cent, in terms of freight moved, compared to the same quarter last year. That represents the lowest quarterly level since 2007-08.

Construction really did hit the buffers over this reporting quarter. With building sites silent, demand for materials was demolished. 500 million net tonne kilometres were lost, compared to the same quarter last year. As a result, market share has fallen from 28 per cent to 24 per cent – construction’s lowest share since the end of 2016-17. However, with renewed activity on several major projects, that figure could be expected to bounce back. Among those projects supported by rail, work has resumed on the London Tideway super-sewer project, and HS2 has moved into its construction phase.

Optimism from the shop floor

One source putting a brave face on the figures is Mick Cash, the general secretary of the RMT trade union. He said the these latest statistics were very worrying, but there was hope for the future. “It is encouraging to hear from our members on the ground and from Network Rail that rail freight is making a strong recovery in the second quarter of the year and we’ll keep an eye out for further updates”, he said.

It is certainly true that rail freight staff have been called the hidden key workers during the coronavirus crisis. “This recovery is in no small part down to our members in the rail freight sector”, added Cash. “Key workers have played a vital role in our response to the Covid-19 crisis, keeping our country’s vital medical and food supplies moving.”

Recovery on the horizon if passengers don’t interfere

The pandemic continues, but wider economic activity has recovered from the rock-bottom experienced in the Spring. That is good news for freight operators, who have seen significant recovery in the interim period. Government announcements, particularly on modal shift to rail have given cause for optimism in future. Most commentators believe rail freight has a larger part to play in the future, regardless of the overall size of the UK economy.

On thing has been apparent though. The halting of the passenger network contributed to the unprecedented reliability of freight operations, thereby proving correct that old railway adage. However, with passenger services underwritten by government for the next eighteen months, and the timetable guaranteed, it seems that the one thing that impedes operations will be with us for the foreseeable future.