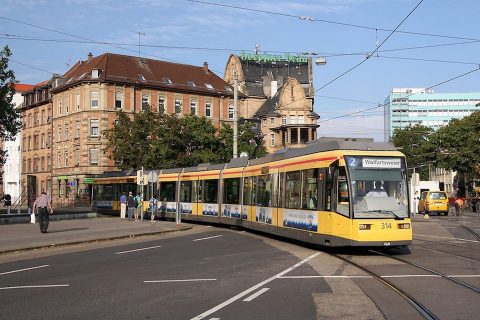 With news that freight trials are under consideration in Karlsruhe, could British tram operators follow their German counterparts and carry more than passengers on their light urban rails? Would frustrated business owners welcome the opportunity for congestion free delivery, or would the fixed-link solution prove too inflexible to be a viable alternative to the ubiquitous delivery truck.

Yellow trams frequenting the city centre and a network of around 100 kilometres in length, including services to a regenerated inland dock area. There, some would say, the similarities end between Karlsruhe in south west Germany, and Manchester in north west England. Could they though emulate each other in one other significant way, carrying more than just passengers on their respective urban systems?

It is certainly true that Karlsruhe differs from Manchester in many fundamental ways. At just a tenth the size of its English counterpart, the 300,000 inhabitants of Karlsruhe enjoy a dense tram network that makes city centre hops a breeze. Manchster on the other hand connects ten boroughs, each comparable in size to Karlsruhe, with the urban heart, in an effort to reduce congestion on the regional roads, and make the city centre a more accessible and liveable place. In the latter respect, Manchster has certainly succeeded, with the city centre population increased ten-fold in ten years.

Relieving congestion, be that of the lungs or the roads, are commendable ambitions shared by both municipalities, but Karlsruhe is going a step further. In an attempt to fully exploit its much applauded and expensively built system, Karlsruhe is about to trial that holy grail of urban fixed links – delivery of goods as well as passengers to the heart of the city. Although still a couple of years away, widely reported trials are planned for one of the eight lines serving Karlsruhe. Here there envious eyes looking on from Manchester, with its equal eight lines of passenger-exclusive Metrolink. Could indeed the German model be the prototype for long considered but never implemented ambitions for commercial traffic on Britain’s urban light rail networks?

Facilities have been entirely lost

Manchester would seem to be the prime candidate. It is by far the most extensive modern tram network in the UK, and much of the network is build on the foundations of a formerly extensive urban heavy rail network. Manchester, like every other British city of any size, had a legacy of urban freight yards, delivering goods right into the heart of city centres. Heavy rail enterprise trains pulled up to city centre buffers, laden with goods for last mile delivery by everything from electric so-called milk floats, to horse and cart and even human runners. However, in the race for regeneration, these facilities have been entirely lost to disconnected office complexes, conversion to urban apartments or, in the case of Manchester’s famous Great Northern Warehouse right on the main thoroughfare of Deansgate, a vast leisure complex.

Deliveries are undertaken from peripheral distribution centres, and much of the congestion in today’s cities comes from road transport covering that tortured run to businesses in the city. The challenge addressed by the Karlsruhe experiment is to establish out of town distribution that can be tram-linked, and benefit from the city’s extensive urban network. In effect the trams become the milk floats of the twenty-first century.

In the post coronavirus cityscape, this may just work for the less extensive networks of the UK cities as well. Manchester, although a more regionally based tram system, already has some lines running to the periphery of its congested conurbation, and a high central urban population to serve. While the goods yards no longer reach into the city centre, there is scope for a socially-distance reversal of roles for places like the Great Northern Warehouse.

People by day and light goods by night could be solution to congestion for both these cities, and many more besides. In a time of reduced passenger patronage too, the concept may well offer a long-term lifeline to economic recovery for both systems. Perhaps the cities of Karlsruhe and Manchster have more in common than is at first apparent.