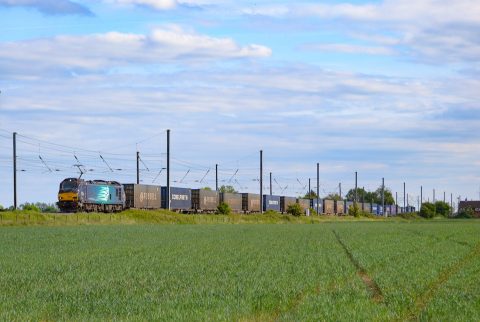 Major representative bodies and stakeholders are today seeking progress on a national initiative to make the railways net-zero carbon by 2050, in line with the UK government target set out in legislation.

Members of the Rail Freight Group, the representative body for the sector, are meeting today with Steven Hart, lead strategic planner at Network Rail, the infrastructure agency, for a private update on the development of the Traction Decarbonisation Network Strategy. The TDNS is one of the main outcomes of a report, submitted one year ago, to the UK rail minister, and is part of the evidence submitted to the UK government, which is due later this year to publish an overall plan for decarbonising transport in time for that 2050 target.

Meanwhile, the Rail Industry Association, a broad representation of interests in the supply chain, has made its own submission to the Department for Transport’s Transport Decarbonisation Plan, urging politicians in Westminster to direct invest in rail transport towards helping achieve that goal.

Steven Hart, who will be addressing Rail Freight Group members today, has been leading the Traction Decarbonisation Network Strategy since January. Freight operators do, by necessity, still rely heavily on fossil fuels, but are making significant efforts to move to more sustainable modes.

“This work is building on work done to date by the industry’s decarbonisation task force, identifying which of three traction technologies, trains powered by battery, 25kV Overhead Line Electrification or Hydrogen, should be deployed where on the unelectrified GB rail network”, says Hart. “TDNS will also identify when these technologies should be deployed, in order for rail traction to meet the UK’s Net-Zero Greenhouse gas emissions by 2050 legislative target.”

Vision for the future

Like many other aspects of parliamentary business, the timetable for response from the government has been somewhat overshadowed by the coronavirus crisis. However, the Rail Industry Association has already made several recommendations. David Clarke, technical director at the Association, has supported the government’s Transport Decarbonisation Plan, and called it a great opportunity to set out the vision for the future. “Rail is already an environmentally friendly mode of transport, it contributes just 1.4 percent of the UK’s domestic transport emissions, but we can not be complacent about the need to decarbonise our train fleets and infrastructure.”

Freight operators have always been aware of the operational need to move freely around the network, and it is only relatively recently that viable alternative traction options have become available. The obvious solution of bi-mode meets the needs for flexibility and lowest-carbon, but the Rail Industry Association says more can be done to support a carbon-free freight sector.

The RIA’s own Electrification Cost Challenge Report says that they can demonstrate more economical methods of delivering electrification to enhance the UK network, and make it more viable for carbon-free freight. They specifically call for a rolling programme of electrification to extend the frontier of electrified rail network, and eliminate the cost of a ‘boom and bust’ policy. “Crucially, decarbonisation of the rail network requires support from government, in the form of a rolling programme of electrification, investment in the network to encourage modal shift and fleet orders or the conversion of current train fleets to use clean energy sources”, says Clarke. “The government’s vision of a decarbonised rail network is very much achievable, but it requires action now to make it happen.”

Today’s address will undoubtedly air the hopes and concerns of the industry, and place renewed pressure on the UK government to meet its own deadlines. Cynics say the only progress to date has been less decarbonisation and more deforestation, as a sheaf of reports are all the outputs of the strategy so far. They may have further cause for scorn, or a genuine plan, if the UK government delivers its scheduled strategy later this year, at the expense of some more forest in the short term.