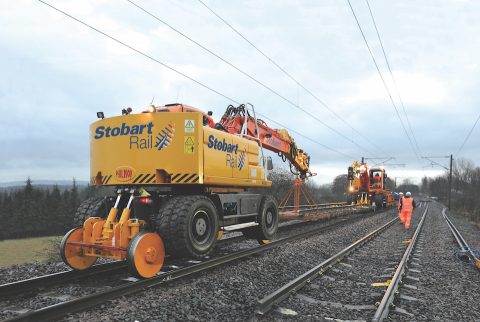 Stobart Group has announced it is pulling out of its rail engineering operations. This decision was taken  as the group reported losses for the financial year of almost 150 million British pounds (169 million euros). The pull of the plug concerns everything with the Stobart name on it, except the iconic Eddie Stobart trucks and trailers.

The iconic name that is not the iconic brand, has been in financial troubles for some time, and posted a second year of increasing losses this week. As a result, the company has turned its back on almost everything except its aviation business. If Stobart were a Facebook relationship, its status would most certainly be ‘complicated’.

Speculation has been circulating within the investment community that the Channel Islands registered company would make radical changes to its business around the time of announcing financial figures for the year. The London Stock Exchange therefore took in its stride the announcement that not only would the group divest itself of its rail operations, but also its civil engineering division.

“We are today announcing a clear plan to stabilise the business and provide a secure platform to move forward”, said Warwick Brady, chief executive officer. “We have a cost-efficient proposition for airlines and will further develop our passenger-focused airport experience that seeks to maintain passenger flow and provide enhanced customer confidence.”

The company has turned its back on the rail industry, despite market sentiment looking towards growth in the sector. However, investors seem to side with the decision, as a capital-raising share issue has been successfully launched.

The rail division of the business is headquartered in Carlisle, and holds principle contractor status with Network Rail. That aspect of the company was formed in 1993, and has gone through a number of bewildering corporate restructuring manoeuvres. It briefly delved into passenger charter work with rolling stock and motive power leased from neighbouring Direct Rail Services.

Up in the air

So, rail and civil engineering out. The business is also planning a longer-term plan to “focus investment and in due course monetise Stobart Energy.” That would appear to be finance-speak for “sell”. The company will concentrate on its regional airports. It currently runs a rebranded operation at Carlisle Lake District, and a well established business at London Southend.

Ironically, the most recognisable example of the Stobart name, the green trucks and trailers, will remain. That’s an entirely separate company – although they did all start out as one big happy family just after the Second World War.

Stobart intermodal trains – or rather trains carrying Stobart branded intermodal containers – will still be seen around the UK network and western Europe. Whether the ‘other’ Stobart brand remains visible is up for debate. Another name change perhaps.