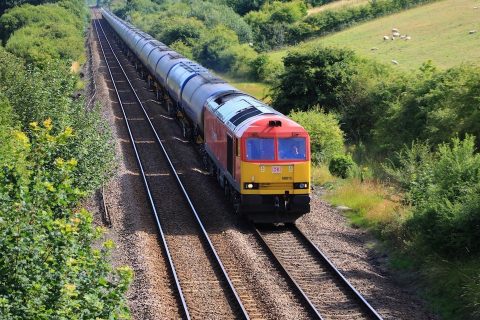 Fuel stream ahead for DB Cargo UK and Puma

DB Cargo UK has secured a multi-year deal with major fuel logistics corporation Puma Energy. The partners will collaborate over the next three years to distribute more than three million tonnes of fuel around the country by rail.

Satisfied customers and satisfied contractors Puma Energy and DB Cargo UK have renewed their partnership, with the UK operations of both companies extending their existing agreement. In a joint statement, the companies announced today a new three-year contract for rail haulage and the supply of rail tank wagons.

The new three-year contract between the two will involve the transportation of more than one million tonnes of fuel per annum from the Welsh port of Milford Haven in Pembrokeshire, and Immingham in Lincolnshire to inland distribution facilities at Theale near Reading and Westerleigh near Bristol. Puma significantly expanded there UK operations when the company purchased the former refinery at Milford Haven, and the associated deep water berths.

As part of the deal, DB Cargo UK will provide trains of up to 30 rail tankers, with a capacity for over three million litres of fuel per train. “This enables a cost-effective, reliable and sustainable supply chain for Puma Energy, a global integrated energy company”, says a DB statement.

The renewed deal comes in the face of significantly reduced demand for fuel in general, put down to the break in industrial and economic activity attributed to the coronavirus crisis and associated worldwide lockdowns. However, Roy Brooke, who is the UK General Manager for Puma Energy, expressed his delight at the renewed partnership and was clearly looking forward to a more optimistic and active future. “After a rigorous evaluation process, Puma Energy is delighted to continue the relationship for rail transportation services with DB Cargo UK”, he said. In emphasising the stability of rail freight for bulk shipment, he added that, what he called “close collaboration on driving efficiencies” would help his company maintain a record for customer service.

From the carriers position, the resigning is a reward for service from DB Cargo UK, according to their account manager David Munt. “The signing of this new contract is a credit to the team at DB Cargo UK who deliver a great service to Puma Energy”, he said. “Over the next three years we look forward to further the growing the volumes we transport by rail for Puma Energy.”

DB Cargo has extensive bulk operations in many of the European territories in which it operates, including the UK, where only last week the company secured contracts to move coal from Redcar Bulk Terminal.

Puma is a multi-national corporation, active in nearly fifty countries. Their business covers all aspects of fuel supply to over 20000 customers worldwide. They operate four terminals in the UK, including Milford Haven in west Wales, where they repurposed a former refinery and deep water port. Their head office is in Singapore – which has fewer native Welsh speakers, but slightly better weather than Milford Haven.