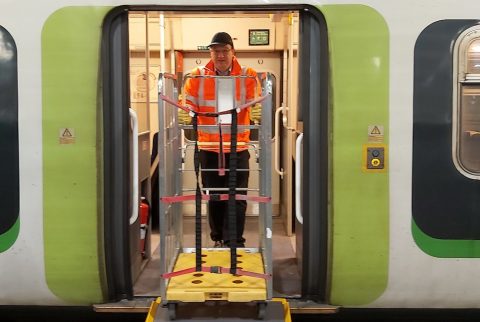 UK first class delivery: are parcels about to return to sender?

With passenger stock lying idle and services reduced, there is capacity for some ideas to get a trial run on the British rail network. Could we be on the cusp of a parcels revival? A batch of innovations are about to get traced, tracked and signed for, unless a government plan to reactivate the passenger timetable gets in the way.

A year ago you might have been lucky to encounter luxury seafood from Cornwall to Paddington. By this time next year, you could be sharing your train with everything, going to everywhere.

Rolling off a platform near you, a cage full of enough variety to make WH Auden think again about his famous lines for the Night Mail. “This is the GB Railfreight operated former passenger rolling stock crossing the border, between Cheshire and Stafford” doesn’t have quite the same onomatopoeic ring to it, but if this month’s trial is labeled a success, we could see a growing list of operators ready to give parcels a ride.

According to GBRf, the trial showed the trains could successfully be loaded and offloaded with standard roll cages at most mainline stations across the UK. The company says that when seats are removed the carriages can carry significant volumes of parcels.

The trial comes hard on the heels of the announcement from Varamis, an operator who plans to put bespoke parcels services on the East Coast Main Line before the end of this year. “Very interesting as they’ve obviously made it work”, said company principal Phil Read. “One advantage at the moment is that it is easier to move trains in the current climate due to the reduction in passenger train services”.

Varamis is already on the UK government catalogue of suppliers for response to the coronavirus crisis, and Read says they are ready to go into action to help with the economic recovery, later in the year.

Sources have also told RailFreight.com that the much leaked Operation Phoenix, a reinvigoration of the passenger timetable, is actively being progressed. There is speculation that ramp-up could begin as soon as 18 May, which in turn is fuelling speculation about the status of the lockdown in the UK.

If passenger operations resume to pre-lockdown levels, Operation Phoenix could put the brakes on trails like those from GBRf. The railway network used to be extensively used for parcel deliveries between stations. However, apart from specially designed trains used by the Royal Mail between dedicated terminals, universal parcel delivery by train disappeared decades ago.

Operation Phoenix is not an immediate concern at GBRf HQ. “We are committed to continuing to help the UK get through this period by ensuring that vital supplies are delivered”, said John Smith, their managing director. “This successful trial shows how the railways can play their role in helping the speedy delivery of vital supplies and we are keen to be able to do our bit to help the NHS meet the logistical challenge of keeping our hospitals supplied during this period of huge demand”.

ScotRail helps charity get scrubs up the line

At least one passenger operator has taken the opportunity to make a few packets move quickly, and in a good cause. Loading up at Glasgow Queen Street station last Friday, for a trip to Inverness, they shipped a consignment on behalf of Love for Scrubs, an NHS charity delivering protective clothing to Highland hospitals.

As well as strengthening supply chains during the current crisis, a return of parcel delivery services to mainline stations could provide online retailers with a more sustainable and reliable options into the heart of major cities. WH Auden would be proud.