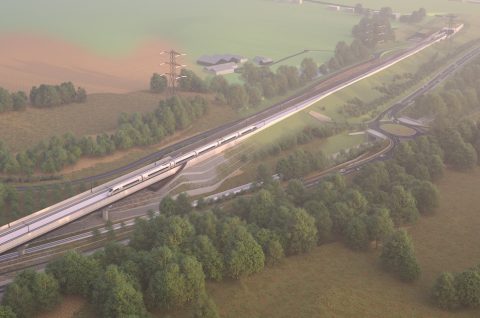 Is HS2 jeopardised by coronavirus?

A court case on environmental grounds has been dismissed but fresh a fresh challenge has arisen to the viability of the HS2 project. Doubts over future demand could negate the need for a new railway line between London and Birmingham, says a critic. Freeing capacity on the network for freight and regional passenger services may not be necessary. Fears are expressed that reduced demand will make capacity enhancements irrelevant and make grand infrastructure projects unsustainable.

Environmental campaigner and media presenter Chris Packham, had raised an action seeking a judicial review of Prime Minister Boris Johnson’s decision to proceed with the HS2. However, at a sitting of the High Court, a panel of judges dismissed the application. Packham sought to halt works on environmental grounds, claiming irreparable damage would be done to unique wildlife habitats. The action was supported by witness statements from various independent conservation bodies.

Legal process in England, where the case was heard, does allow for statutory appeal to the dedicated Court of Appeal, and potentially to the Supreme Court, which is the final arbiter. However, legal representatives for Packham reserved comment until the full court finding is published next week.

Work continues on several key sites in connection with HS2. Notably, the controlled dismantling of two 1960s office blocks in central London. That project is part of the redevelopment of Euston Station, which will be the eventual southern terminus of the line.

There’s also extensive work underway at Old Oak Common in the west of London, the largest single project to date. Development is underway at the Birmingham Interchange site, adjacent to the existing Birmingham International station and the new Nightingale Hospital, built within the National Exhibition Centre complex, to accommodate coronavirus patients.

In Birmingham city centre, the derelict Curzon Street station site is already being prepared for HS2, and was recently in the news when an important industrial archeological site was uncovered during the works.

In a separate development, the one-time co-chair of the report into the HS2 project, Lord Tony Berkeley, has written to the prime minister. He is urging an about-turn on the project, due to the long-term effects of the Coronavirus crisis. He says that demand for long distance business travel will be depressed for years to come, as a result of the virus forcing many people to work remotely. Therefore, he argues that HS2 will not be necessary as pressure on the network will be reduced.

Lord Berkeley, who has written to the prime minister, is a well known as a critic of the HS2 project and resigned his position on the report over a fundamental disagreement with its chairman and fellow peer Lord Douglas Oakervee.

In the letter, Lord Berkeley argues that in the much changed world we face after coronavirus, the budget for HS2 would be better allocated to enhancement projects, such as receiving the congested Castlefield corridor in Manchester.

A spokesperson for the Department for Transport, commenting on the Packham court decision, also had relevance for the Berkley letter. “While our current priority is combating the spread of coronavirus, we must continue our work to level up the country”, they said. “HS2 will be crucial to that ambition, boosting capacity and connectivity across our rail network. We have tasked HS2 Ltd with delivering one of the UK’s most environmentally responsible infrastructure projects”.

As recently as last week, government sources reinforced their commitment to developing the UK railway network, to increase capacity overall, for both passenger and freight traffic. The thrust of last week’s statement made much of modal shift for environmental reasons, and for a greater reliance on rail-borne goods as a means of sustainably growing the economy.

Given that the railways currently only carry a proportion of passenger and goods traffic overall, any significant modal shift will radically increase the demands on the network. While Lord Berkeley’s argument may be proved right in the years to come, any decline in travel will be more than offset by a shift away from other modes of transport.

While the nature conservation bodies arguing to protect habitats in the construction phase may not be placated, the long term environmental impact could well be positive, with or without HS2.