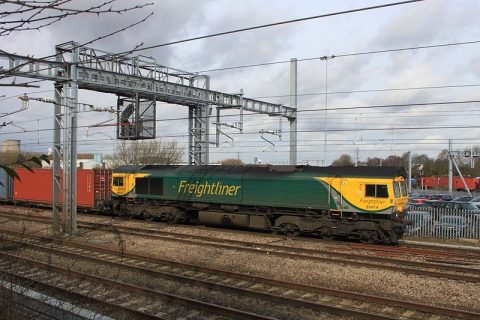 Published on 12-03-2020 at 07:07
The terminal at Coatbridge is wired for electric traction, like this facility in Oxfordshire Image WikiCommons

They may not have been satisfied by the UK budget yesterday.  The pressure group Railfuture has released a list of priority schemes. The campaigners believe these are the most urgently needed interventions to release capacity for freight operations.

Railfuture has called for series of electrification infill projects to be urgently addressed, to allow the industry to contribute to greening the UK economy. Will the chancellor take heed? is their question. As part of an overall programme of support for rail decarbonisation, Railfuture has proposed that key missing links be infilled, so that more freight can be hauled by electric locomotives and investment in bi-mode locomotives can be justified by the rail freight industry.

The nine highest priority schemes, as identified by the organisation, are all on congested parts of the network in England. “Government needs to invest in a rolling programme of electrification”, says Railfuture. Their priority nine schemes are:

Some proposals seem very achievable. The short few kilometres from Thameshaven Junction would connect the main intermodal operations on the upper reaches of the River Thames. Several of the infill schemes would also feed on to the West Coast Main Line, the busiest mixed-use route in the UK, which already forms part of the electric backbone of the UK network.

Hidden in the list is one significant port connection. Felixstowe is Britain’s busiest container port, and it has been the subject of much debate that the line to Ipswich, which provides a connection west and north, is not yet wired.

While the list has widespread industry and environmental support, it remains ambitious. Even the headline project of connecting Felixstowe has been repeatedly shunned by funding authorities. Whether the higher ambitions of the new UK chancellor will change that, remains to be seen.

However, elsewhere, the picture may be brighter, and freight could, in fact, be the catalyst to electrification projects, and even line reopenings. Jane Ann Liston, an elected local authority representative in Fife, Scotland, says that Levenmouth, which is soon to have passenger rail services restored, should also see freight as part of the mix.

“Some of these proposals would help as alternatives”, she said. “The Levenmouth line was being used for freight until recently”. Liston also cited the proposed Talgo factory at the site of the Longannet power station, where the Spanish manufacturer seeks to build rolling stock for the UK and European markets. She believes that would be an obvious extension to the electrified line, a few kilometres away at Alloa, and may be the catalyst for opening the line eastwards, towards Dunfermline in her Fife area.

The councillor, who represents the Levenmouth community of the former freight line, said that the rail freight lobby was better organised than the public perhaps realises.

Like the other devolved nations within the United Kingdom, Scotland received a boost from the budget. An additional 640m British pounds (730m Euros) was allocated to coffers. Whether any of that makes it to funding new railway projects is too early to say, but campaigners with freight agendas – such as those in the north east, of the Campaign for Borders Rail, who seek to make timber a viable rail cargo, will doubtless be lobbying their respective governments anew.