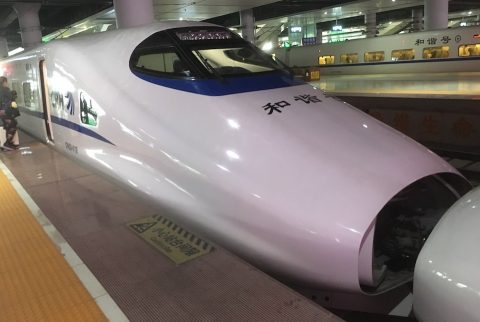 Published on 17-02-2020 at 10:14
China Highspeed Rail covers the country and the construction consortia has offered to build Britain's HS2 - Simon Walton

The Chinese agency responsible for a vast network of dedicated high-speed lines has proposed to build HS2, UK’s high-speed railway line. It can do this at significantly lower cost than the much quoted GBP106bn (euro127bn), and complete all before the end of this decade.

There was good news last week for Mark Thurston, the man at the top of HS2 Limited. The company was finally given the government green-light to build the new high-speed railway line, connecting London with Birmingham, and later Manchester and Leeds. As if that was not reason enough to celebrate, a tempting offer to end all tempting offers has arrived on his desk.

Instead of the enormous headache of construction of the 100 miles (160km) between London Euston and the historic facade of Birmingham Curzon Street, and then the long drawn out process of reconvening to build the contentious “Y” shaped layout, north to Manchster and Leeds in the 2030s, an alternative offer was made. The Sunday Times newspaper claimed that China Railway Construction Company (CRCC) has proposed to step in and build the entire network, in one project, in five years, and it would be even higher speed too.

The surprise offer obviously has attractions – not least the prospect of a step-change in capacity for the British network, delivered midway through the decade, rather than midway through the century. The spike in construction activity – particularly for the heavy haul division of the railfreight sector – could not come at a better time, as the UK economy seeks post-Brexit stability.

The possibility of the cost coming down, potentially releasing funds for the sort of infrastructure enhancements demanded by northern England, must be equally tempting for the new British Prime Minister Boris Johnson, and his transport secretary Grant Shapps. However, despite making several references to rail projects in a television interview on Sunday, Shapps has played down any prospect of Chinese intervention in HS2.

Anyone who has ridden any of the 20000 miles (32000km) of the China Highspeed Railway (CHR), will know that the engineers have the capability. Barring a much publicised accident in 2015, the system has transformed travel in that vast country, the way HS2 is tipped to transform the much smaller British network.

Fears remain about the involvement of China in another strategic part of the British infrastructure. The railways today are as digitally dependent as any other aspect of the modern economy, and the controversy over 5G installation is already a daily headline. There has also been a howl of protest from the British construction industry, and other quarters, with concerns over everything from standards to worker welfare. However, putting aside political ideology, the challenges of building in the crowded British Isles may not yet be entirely apparent to any overseas suitors seeking a stake in the future of a newly global Britain.

The statutory framework in Britain is very different to that which exists in China. The planning process, most often quoted in media, makes sure that there is both a legal requirement to consult those deemed affected by major projects, and a right of appeal for both sides. That process goes through several stages and can be elevated all the way to the Government in Westminster.

Objectors can include both individuals and corporate bodies, and grounds extend beyond simply arguing over property rights. Famously, the Ordsall Curve – a project to enhance capacity for freight and passengers across the North West of England – was delayed for over a year by an objector who claimed the short section connecting two existing lines would cause untenable heritage loss by severing the original alignment of the pioneering Liverpool and Manchester Railway.

While heritage has been routinely swept away in China, where a culture of renewal is highly prized, the key difference is in the relationship between property rights and the state, which makes development far easier to push through. Property owners there typically only have a leasehold, over which the State has legal superiority and can require the land .

Undoubtedly, China Railway Construction Company has vast experience, and operates with all the military discipline and endeavour as may be expected from what was formerly a division of the Peoples Liberation Army. Vast projects are nothing new to China, and the State demands compliance from its people in a way that would not be tolerated in the counties of Bedford, Buckingham, and Hertfordshire.

Moving a million and a half people to build the Three Gorges Dam is one thing, moving objectors in the Three Counties of England is a matter of an entirely different magnitude. Only once that cultural incompatibility has been resolved, could a project as vast as HS2 be completed in five years with all the zeal of Peoples’ Republic.